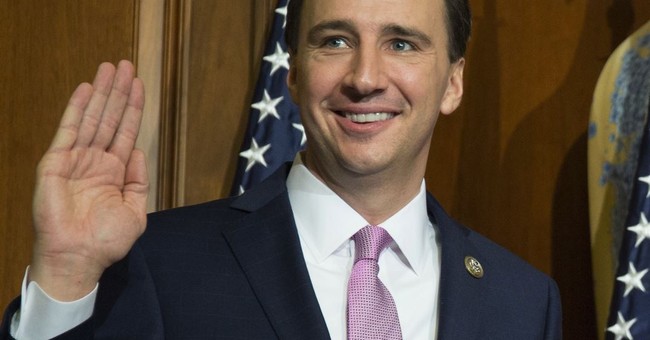 Pennsylvania's 6th Congressional District was a pretty safe Republican stronghold until the state supreme court redrew the map and turned it into a D+2 seat. Rep. Ryan Costello appears to have recognized the uphill battle he now faces and is retiring from Congress.

Free from political shackles, the departing representative sounded off on President Trump during a few recent interviews.

He gamely rattled off some of the difficult events from the past year: “Charlottesville. Firing of Comey. Then there’s been a couple of tweets. The Mika Brzezinski tweet was something. Didn’t he say Kirsten Gillibrand would do anything for money?” (He did.)

“Things like that were little bumps in the road,” he said. “It was stormy before there was Stormy.”

Costello said in a separate interview with MSNBC's Katy Tur that he believes Stormy Daniels's story.

"I have little kids," Costello said. "I don't want them to ask me 'what does Stormy Daniels do for a living?'"

"I disagreed with many of President Barack Obama's policies, but he was a good role model," Costello explained. "He conducted himself in an appropriate way."

Trump's conduct came up repeatedly throughout the interview, with a few of the chyrons reading, "When Character Trumps the Agenda," "Can GOP Message Cut Through Trump drama?" and "WH Dodges Questions About Pres. Trump's Morals."

The fact remains that Costello voted for the president in 2016. Tur wondered if he regretted it.

Although Costello noted that he supports the president's tax reform bill and other policies that benefit the middle class, he is dismayed by Trump's wayward moral compass.

However, asked again, Costello said he chose the right candidate in 2016, because the alternative was Hillary Clinton.

Because Costello is a moderate Republican with now plenty of experience criticizing the president, we can expect him to get booked on a lot more shows.