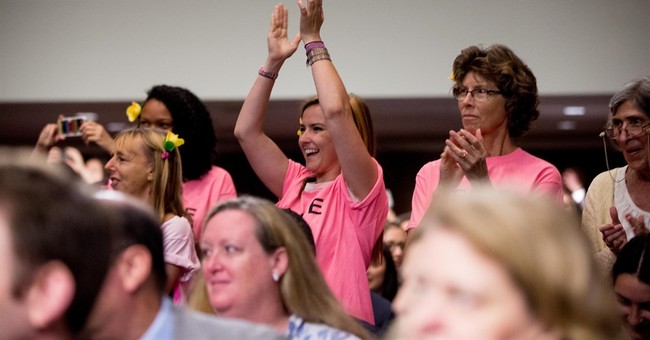 Nikolas Cruz, the 19-year-old killer, “was an expert marksman because he was trained by the U.S. Army JROTC program,” Code Pink asserts.

There's only one thing to do.

The school shooting in FL has once again highlighted the role of the military in our lives and in our schools.  It’s time to stop the militarization of our children and end the JROTC program.  The Parkland high school JROTC program taught Nikolas Cruz to shoot an AR-15 and was funded by the NRA.  Our schools should be filled with trained educators, not a proving ground for military-style assault rifles.

Tell Senator McCain and Representative Thornberry to take the war machine out of our schools! The JROTC program must end immediately. The money should be directed back into classrooms that educate our children.

Of course, Code Pink has their sights on the NRA too.

Congressional hearing about Parkland shooting, guns and school safety happening now @SenFeinstein says there is nothing we can do except say "sorry". Yes there is. We must pass gun laws, get JROTC and NRA out of our schools and #DivestFromWar pic.twitter.com/kHGI0kgaZZ

It's amazing we have to say this, but the NRA and the JROTC are not to blame. They did not train Cruz to kill 17 people in cold blood. Cruz, as we have learned, is a mentally disturbed young man who was already on the FBI's radar before he showed up at the school with the intent to murder.

Code Pink did not mention on its campaign page that one of the heroes in the Parkland shooting was 15-year-old Peter Wang, a JROTC cadet. When the bullets started raining down on his peers, Wang stayed to hold a door open for them to escape. He was killed in the action. West Point Academy awarded him a posthumous admission in his honor. Wang was also given the Army’s Medal of Heroism, along with two other cadets, Alaina Petty and Martin Duque, who were also slain that day.