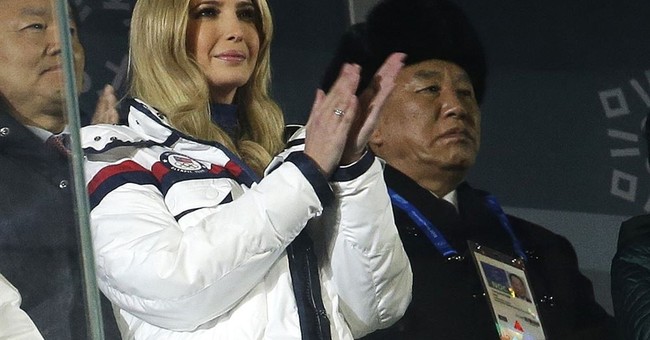 You may have heard the furor one Olympian faced after posting a selfie she took with First Daughter Ivanka Trump. The athlete, bobsledder Lauren Gibbs, said that, despite politics, she was happy to meet both Ivanka and White House Press Secretary Sarah Huckabee Sanders and proudly posed her photoshoot with them. Trump-hating Twitter went nuts, demanding to know how Gibbs could post such propaganda. She defended the pictures and urged her followers to stay civil, but eventually got fed up enough to remove the photos from her timeline.

Another Olympian bob sledder, Nate Weber, defended Ivanka's trip to the Games. Weber, who not only represents us as an athlete but served as a Green Beret, shared how appreciative he was that Ivanka treated him and his daughters like family. Ivanka sat with his children during his final bobseld races and then took photos with them.

When the hate poured in, he refused to let it change his mind.

Maybe they would have been more understanding if Weber had taken photos with Kim Yo Jong, the sister of North Korean dictator Kim Jong Un. Unlike Ivanka, Kim Yo Jong received a glowing reception from the press for her "diplomacy."

Thankfully, Weber noted, his daughters don't have a Twitter page and their Olympic memories with the First Daughter will remain untainted.

Here's the thing about this. My girls don't read Twitter. All they have is a wonderful memory of today.