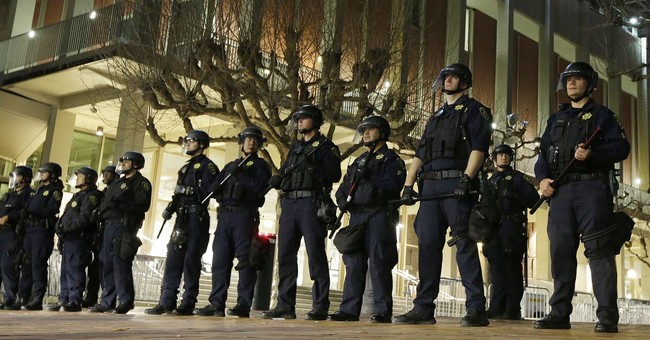 Students are afraid to speak their minds in class, according to a survey from the Foundation for Individual Rights in Education and the Knight Foundation. This self-censoring is thanks in part to a culture that punishes unpopular opinions.

The survey, conducted in 2016, found that free expression on campus is slowly becoming extinct. A slight majority of students surveyed admitted that the campus climate prevents them from saying what they believe because "others might find it offensive."

That's where Speech First comes in. The new organization, comprised of students, parents, faculty, alumni, and concerned citizens, is dedicated to protecting the free speech rights of students on campus - and it launches today.

“The message is clear," Speech First President Nicole Neily said in a statement Wednesday. "Students with unconventional ideas should shut up and keep their opinions to themselves. This is wrong. Censoring speech infringes the rights of students to express their opinions on campus. Just as important, it harms the rights of other students to listen to the speech – to challenge, debate, and learn from the views of their fellow students."

“When students’ speech rights on campus are violated, it’s tough to fight back," she continued. "A lone student doesn’t stand a chance against a school with a huge endowment and an army of lawyers. It’s a real David versus Goliath situation. That’s why Speech First was created.”

Conservative speakers have also found the First Amendment out of reach these days. Daily Wire Editor-in-Chief Ben Shapiro had a heck of time ahead of his appearance at the University of California Berkeley, where student protests cost the school about $600,000 in security fees. Safety concerns also prompted the school to move his speech to a venue that was much smaller than he had envisioned.

“We’ve been told that we have to hold events like this far away from the main campus because it might make someone feel uncomfortable," he said. "We had to move the event from venues that hold 1,500 people because obviously we don’t want to offend anybody.”

Townhall's own Guy Benson faced a similar environment leading up to his appearance at Brown University earlier this month. A group of concerned students penned a letter about the "Millennial Conservative" event, warning that it was "dangerous to the well being" of marginalized groups and "enabling" of white supremacy.

With Speech First as a new resource, hopefully students will find more confidence to take on these powerful, speech suppressing forces.

"Through advocacy, litigation, and other means, we will put colleges and universities on notice that shutting down unwanted speech will no longer be tolerated."