NRA's LaPierre: Why Are NBA Stars Better Protected than Our Children? 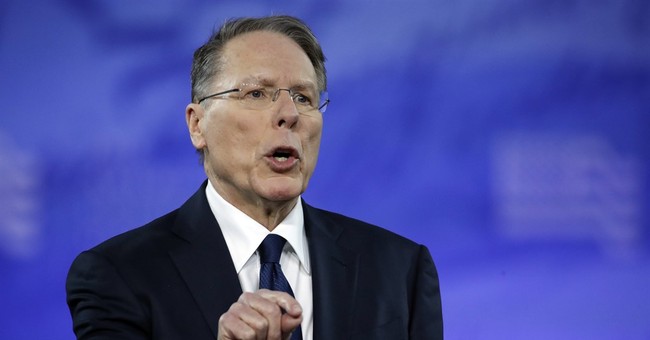 A week after the deadly shooting at Marjory Stoneman Douglas High School in Parkland, FL, NRA executive vice president Wayne LaPierre is calling for more armed guards in schools. He made the suggestion in his speech at the Conservative Political Action Conference in National Harbor, MD Thursday.

"Evil walks among us, and God help us if we don't harden our schools and protect our kids," LaPierre told the crowd.

Both liberals and conservatives agree action needs to be taken in the wake of the Parkland shooting, which left 17 people dead. But, those solutions vastly differ. Liberals want new gun control legislation, such as a ban on "assault weapons" like the AR-15, which the Parkland gunman used. Conservatives, however, believe more gun laws will do little to deter killers. Instead, they propose arming teachers or upping the number of armed security guards.

It's unacceptable, LaPierre said, that banks, airports and athletes get more protection than our children.

.@NRA's Wayne LaPierre: "Our banks, our airports, our @NBA games, our @NFL games, our office buildings, our movie stars, our politicians - they're all more protected than our children at school." pic.twitter.com/7vYj73WNqV

At the White House this week, President Trump also suggested arming teachers who have military or special training experience. He hosted a discussion with several shooting survivors, fielding their suggestions. He signed a memo ordering Attorney General Jeff Sessions to ban the sale of bump stocks and is considering raising the age limit to purchase certain guns. He is also turning his attention to mental health and comprehensive background checks.

Trump will meet with veterans to talk school safety later this week. It is now a "top national priority" for the administration, Vice President Mike Pence said Thursday.