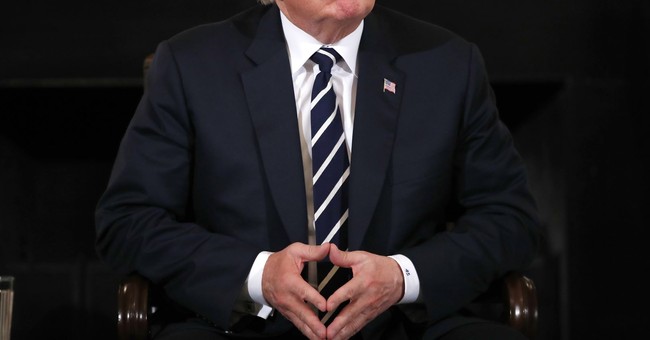 "A gun-free zone to a maniac, because they're all cowards, a gun-free zone is 'let's go in and let's attack because bullets aren't coming back at us,'" Trump said. "If you had a teacher who was adept at firearms, they could very well end the attack very quickly."

"I really believe that if these cowards knew the school was well guarded by professionals with great training, I don't think they'd go into the school to start off with," he continued.

During the listening session Trump, along with Vice President Mike Pence and Education Secretary Betsy DeVos fielded ideas and statements from a number of attendees. One father, whose daughter was murdered at Columbine, suggested the administration and schools focus on relatedness in order to heal communities.

"If you focus on relatedness, and how we can relate with one another, then you can celebrate the diversity, and you can see the unity take place."@POTUS meeting with students and teachers in wake of Florida school shooting - Part 5. pic.twitter.com/om9ekdKWIf

Other parents suggested teachers have the capability to fight back against an attacker with a firearm. Some students suggested gun control as a way to prevent future mass shootings.

"When that alert goes off & they put the kids in the closets & they put the kids under the desks, then I want the teacher to open that safe, pull out that firearm, & be ready to do what needs to be done."@POTUS meets w/ students & teachers in wake of Florida shooting - Part 6. pic.twitter.com/cZL63jCUZV

"I turned 18 the day after I woke up to the news that my best friend was gone, and I don't understand why I can still go in a store and buy a weapon of war."@POTUS meeting with students and teachers in wake of Florida school shooting - Part 4. pic.twitter.com/R2CCzRjoJ0

President Trump opened the session with a prayer and promised to get something done on the issue.

On Tuesday Trump issued a memo to Attorney General Jeff Sessions directing the Department of Justice to implement new policies banning bump stocks. He is also in favor of raising the age of eligibility to purchase an AR-15 to 21 and supports a bill from Texas Senator John Cornyn to strengthen mental health measures in the National Instant Criminal Background Check system.