The Intercept Laments that '12 Strong' Gives Wrong Idea About Masculinity 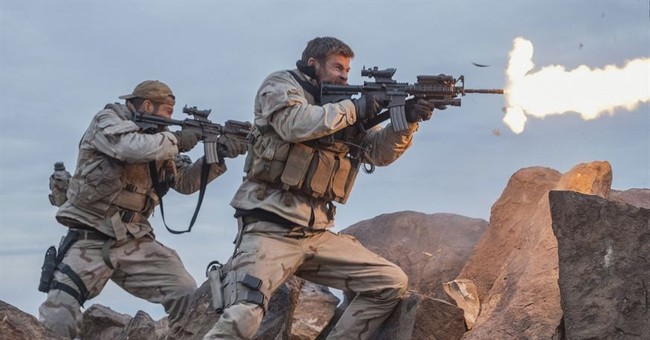 I had the pleasure - no, the honor - of speaking with Green Beret Mark Nutsch last week before I went to screen the new film, 12 Strong. He is portrayed in the film by Chris Hemsworth, albeit with a different name. The movie tells the true story of how 12 men became the first to fight in Afghanistan in the days following the September 11 terror attacks. The terrain in the region was so treacherous they had to fight on horseback. Not only did they execute their mission against Al Qaeda the Taliban - they did it in only three weeks.

If Nutsch and his fellow soldiers don't qualify as heroes, there's no hope for the rest of us.

Still, their heroics are problematic for some media. Here's how The Intercept interpreted the movie, which, again, was based on a true story.

In the #MeToo era, Hollywood should turn away from war movies like “12 Strong” that send harmful messages about masculinity and violence. https://t.co/lSKDkv9ub3

One scene in particular, in which Hemsworth's character rides into battle on a horse with guns blazing, was of special concern because it "checks off one born-in-Hollywood cliché after another: of the rugged gunslinger, the warrior in camo, good versus evil, the modern vanquishing the profane, a man at his fullest," Peter Maass writes.

"Don't get him wrong." Maass knows that many of our soldiers are brave. He just thinks that constantly portraying their bravery is getting old.

"What matters is that well into the second decade of our forever war, the combat movies that populate our multiplexes and our minds are devoted to a martial narrative of men-as-terminators that should have been strangled at its birth a long time ago."

Hm, yes, the image of men fighting on the battlefield is rather masculine, and yes, war often requires violence.

As is often the case, modern feminists are not seeing the full picture, or the real enemy. Social media users were there to set them straight.

"12 Strong" is about brave men fighting the Taliban. The Taliban treat women like cattle. Masculinity is the salvation for abused women. https://t.co/3GfTMJdU3C

The 12 men who fought for us without hesitation deserve our commendation and gratitude, and any medal we can give them. It would still pale in comparison to their sacrifice.

12 Strong is not just a good movie. It's a 5-star movie. At least in my opinion.