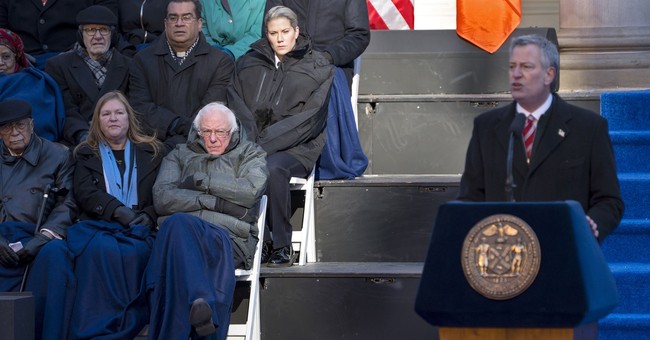 The mayor is "seeking billions in the lawsuit to recoup money spent by the city for resiliency efforts related to climate change," from the major oil companies, the Associated Press reports. It will include reparations for damage after devastating storms and costs to prepare the city for future disasters.

The lawsuit contends that the targeted oil companies have produced more than 11 percent of the world’s carbon and methane pollution from industrial sources “since the dawn of the industrial revolution.”

“The city seeks to shift the costs of protecting the city from climate change impacts back onto the companies that have done nearly all they could to create this existential threat,” reads the lawsuit, which was filed in the Southern District of New York. (New York Post)

Hurricane Sandy upended the city in 2012. The death toll was 117 and the damages were about $65 billion. Climate change activists shared studies like this one from Nature Climate Change that suggested climate change put the extreme weather "on steroids."

It is possible that subways and tunnels may not have been flooded without the warming-induced increases in sea level and storm intensity and size. Putting the potential price tag of human climate change on this storm in the tens of billions of dollars. (The Guardian)

A spokesman for Shell, the only company to offer a response to the lawsuit so far, said climate change is a complicated matter that has no place in court.

In his mission to combat climate change, De Blasio has vowed to cut emissions from New York's towering skyscrapers in an effort to become more energy efficient. Under the initiative, about 14,500 private and municipal buildings would have to invest in better heating and cooling systems, insulation and hot-water heaters by 2030, or face penalties. More recently, he announced plans to divest the city’s pension funds from fossil fuel companies over the next five years.