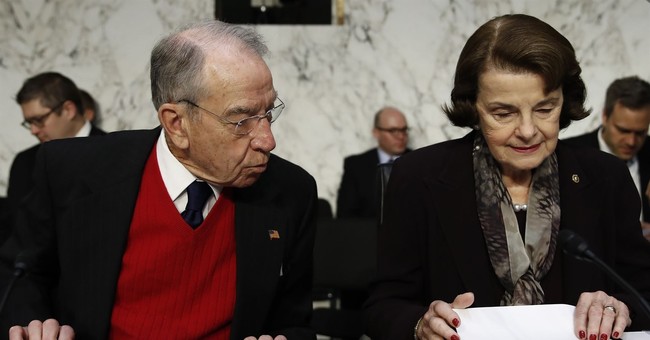 Grassley's press secretary Taylor Foy released a statement criticizing Feinstein for going back on her word and not consulting with the chairman before releasing the transcript.

"Her action undermines the integrity of the committee’s oversight work and jeopardizes its ability to secure candid voluntary testimony relating to the independent recollections of future witnesses," Foy said.

On Wednesday, CNN's Manu Raju got a reaction from the senator himself, who emphasized the "problems" Feinstein has created for the committee and the investigation. The Fusion GPS would have been released eventually, but Feinstein acted much too prematurely.

"People will be more reserved about cooperating," and voluntarily coming forward to interview, Grassley said. People, he meant, like Jared Kushner.

Grassley just told us that Feinstein release of transcript makes it harder to bring in Jared Kushner. Asked him if Kushner is off the hook: “No, not at all.”

The fact that Sneaky Dianne Feinstein, who has on numerous occasions stated that collusion between Trump/Russia has not been found, would release testimony in such an underhanded and possibly illegal way, totally without authorization, is a disgrace. Must have tough Primary!

Grassley, not entirely amused, told CNN he "doesn't want to know" what Trump meant by the statement.

In the formerly confidential transcript, we learned that one person died as a result of the publishing of the dossier, so Simpson's attorney Josh Levy told the committee.

Despite the controversy over the release of the transcript, Grassley said that he and Feinstein were working on which witnesses to bring forward.

Cassidy Hutchinson's Credibility Has Taken Another Hit
Townhall
'The difference matters': Reporter notes that the 'shot at' narrative is nuanced and suspect might not have taken aim
Twitchy
The Left Is Pouncing on Pics of Highland Park 'Person of Interest,' Desperate to Make Trump Link
Redstate
BLOODBATH: Six Dead, Two Dozen Wounded at Suburban Chicago 4th of July Parade [UPDATED]
PJ Media