Lawmaker: The Colts Should Refund Upset Fans Sick of Them Kneeling 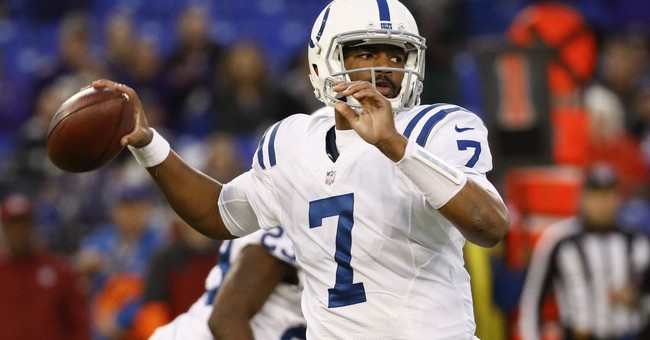 Indianapolis Colts fans deserve better, according to Rep. Milo Smith (R-IN). They come to these football games to watch football, not sideline politics.

Smith is proposing the team refund attendees during the first quarter of games. It would only take effect if Colts players kneel - not their opponents. Smith insists it is within constitutional bounds because it doesn't prevent players from kneeling. ACLU Indiana has a different perspective, arguing "the worst thing that could happen is government weighing in and trying to control in any direction the political speech of private actors."

Former San Francisco 49ers quarterback Colin Kaepernick was the first player to kneel during the playing of the national anthem in 2016. He says it was a nonviolent way to act out against what he views as racial and social injustice in the United States. However, plenty of people saw it as a disrespectful display, judging by how he was nearly booed out of stadiums for several months after.

This past September, President Trump exacerbated the issue by calling Kaepernick and any other kneeling player an "SOB." Over 200 players decided to stage a protest and kneel during the anthem that following Sunday.

In the end, it seems to have backfired on the players. NFL ratings have cratered.

Smith was one of many Americans to be offended by the kneeling football players. In September, he attended a Colts game with his daughter when some of their players staged the anthem protest.

"I'm pretty patriotic, and it didn't sit right with me," he said.