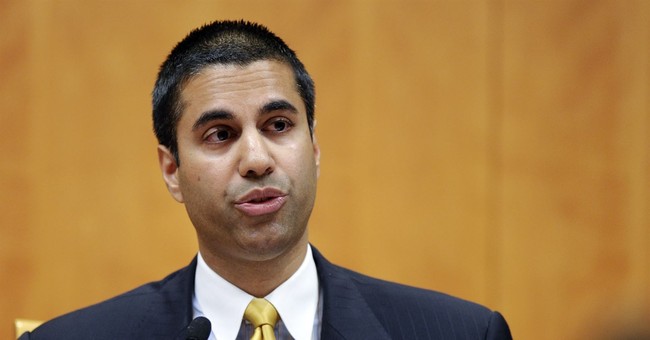 “The internet is the greatest free market success story in history,” FCC Chairman Ajat Pai said in a call with reporters Tuesday. That’s why he hoped the net neutrality rules enforced by President Obama would get overturned in Thursday’s vote.

His wish came true. The Republican-controlled commission has voted to repeal the rules by 3-2.

Commissioner Mignon Clyburn was not happy.

The net neutrality rules, intended to treat all online content equally, are a “heavy handed solution” that was “slapped” on internet service providers, Pai said before the vote. They are “unnecessary and harmful to competition and consumers.”

Net neutrality rules have hampered infrastructure investment, and led to a 5.6  percent decline in high speed networks in past two years, he added.

The rules have been especially cruel on smaller internet providers who serve rural parts of the country, Pai explained. They are struggling with being "micromanaged" by Washington bureaucrats.

Another negative effect of the net neutrality regulations, Pai explained, is less innovation. He shared how one company in which he’s been in contact with has been "holding back" on building on out of home wifi systems because they were uncertain how the FCC would view their efforts.

Pai’s solution is to return jurisdiction to the Federal Trade Commission. Providers will have to disclose different aspects of service offerings (blocking access to content, etc.). It will be a “cop on the beat” exposing privacy violations, and trade practices among internet providers, the FCC chairman explained.

The result, Pai said, will be a "better, faster, cheaper internet."

Others, like Democratic senator Kirsten Gillibrand (NY), believe the rules are what accounts for the open internet Americans enjoy.

Today, the @FCC is voting on a proposal to wipe out #NetNeutrality, which ensures that the Internet is free, fair, and open to the millions of people who use it every day. Keep fighting back—make yourself heard on this.

The ACLU had been urging the FCC to retain the rules as well.

Here are some of the reasons we care that the FCC is about to vote whether or not to repeal #NetNeutrality pic.twitter.com/fdjap1xGRL

In a last minute pitch to rally support behind the anti-net neutrality effort, Pai told the Daily Caller that Americans will still be able to use the internet for shopping, Instagramming, and other favorite hobbies once the regulations are repealed.

The Day the Electricity Died
Townhall
Christina Pushaw's shot/chaser from a Dem Rep shows the power of polling
Twitchy
Uvalde-Born Matthew McConaughey Strikes the Right Note in Visit to Hometown
Redstate
Why the Heck Did Amber Heard's Legal Team Call Her Back to the Stand?
PJ Media