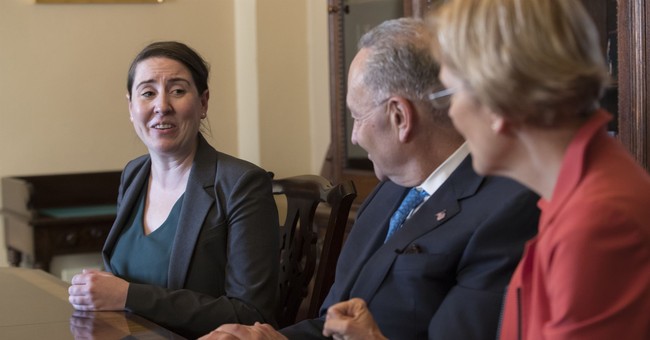 That time the top Democrats in Congress applauded an official's unlawful actions.

A U.S. District Court judge in Washington Court has ruled that Trump-appointed Mick Mulvaney is the rightful acting director of the CFPB, but that didn't stop Nancy Pelosi and Chuck Schumer from standing by the defeated.

Incredibly thankful for the determination of Leandra English, the rightful Acting Director of @CFPB. #DefendCFPB pic.twitter.com/giUKsOCL2p

Richard Cordray, the outgoing chief of the Consumer Financial Protection Bureau, tried to give Leandra English his post. However, President Trump had other plans and announced that he was appointing Mick Mulvaney as the acting director. English requested to a judge that he block Mulvaney from taking over. The two parties cited different statutes in their quest to assume power. Team English leaned on the Dodd-Frank Act, while the Trump administration referenced the Vacancies Reform Act, allowing presidents to fill vacancies at executive agencies. The latter won.

Things did get pretty comical in the midst of the legal dispute. While English was already acting like she was in charge, emailing staff with orders, Mulvaney was bringing in donuts telling them to ignore her.

Recommended
Why is the Government Using Black Tarps to Hide Illegal Immigrant Men at the Airport?
Katie Pavlich

Mulvaney is also the director of the Office of Management and Budget. He's going to have a busy December.