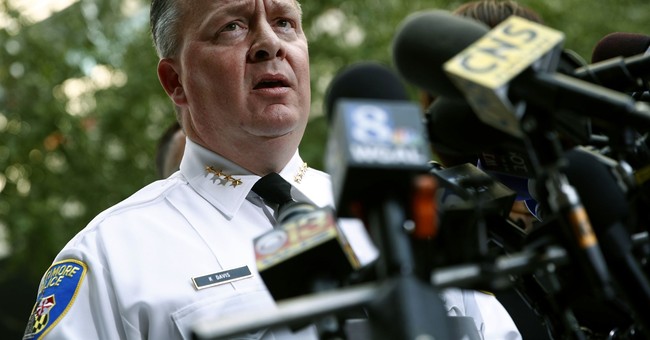 A Baltimore homicide detective has died after being shot in the head Wednesday night by who Baltimore police describe as a “soulless killer.” He is believed to be wounded, but is still on the run. The slain detective, Sean Suiter, was an 18-year veteran of the city police force who joined the homicide unit in 2015. He was just 43 years old.

Suiter was shot while investigating a killing in the Harlem Park neighborhood in West Baltimore. He later died at Maryland Shock Trauma surrounded by his wife and his five children.

The Bureau of Alcohol, Tobacco and Firearms is combing the streets near the crime scene for clues, along with the Baltimore Police Department. Authorities are offering nearly $170,000 to anyone who may have information to help with the investigation.

We still need your tips. Here is the billboard that is running in Baltimore. Call any of the tiplines or 1-800-CALL-FBI. @BaltimorePolice pic.twitter.com/iH0ChodmQN

"We will find the person responsible for this ridiculous, absurd, unnecessary loss of life," Davis said. "The shooter knows what he did and he knows who he did it to ... $69,000 is the reward that is being offered to anyone with information that can help us solve this case. It shouldn't take 69 cents. We are absolutely certain that the community will step up again and stand with the Baltimore Police Department to bring this heartless, ruthless, soulless killer to justice."

Suiter is the city’s 309th homicide victim this year.