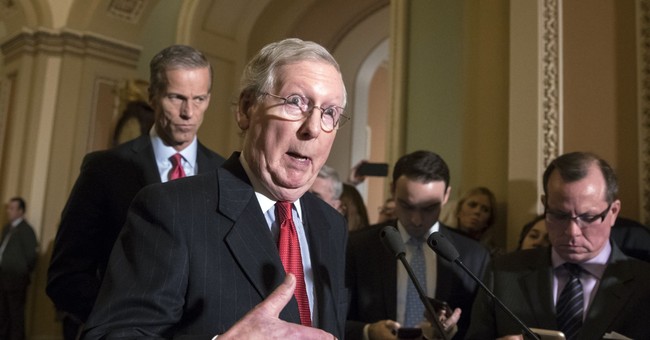 “Sexual harassment is never acceptable and must not be tolerated,” Schumer, D-N.Y. said in a statement Thursday. “I hope and expect that the Ethics Committee will fully investigate this troubling incident as they should with any credible allegation of sexual harassment.”

Franken’s fellow MN Democrat @amyklobuchar: “This should not have happened to Leeann Tweeden. I strongly condemn this behavior and the Senate Ethics Committee must open an investigation.“

UPDATE: Franken has issued a longer statement in which he encouraged and pledged to cooperate with an ethics investigation.

.@alfranken: “The first thing I want to do is apologize" pic.twitter.com/U6BWpzaPVM

Senate Majority Leader Mitch McConnell wants an ethics investigation into Sen. Al Franken's (D-MN) behavior in light of new explosive allegations that he inappropriately touched a woman while on a USO tour in 2006. The top Republican in Congress hopes his counterpart, Chuck Schumer, will support his effort.

Mitch McConnell calls for Ethics investigation for Franken: “I hope the Democratic Leader will join me on this. Regardless of party, harassment and assault are completely unacceptable—in the workplace or anywhere else.”

Franken's accuser, Leeann Tweeden, shared her account on Thursday. Franken, she claims, groped and kissed her without her consent as they were rehearsing for a skit. Then, on the return flight, Tweeden fell asleep and Franken proceeded to take pictures of his inappropriate behavior.

In a statement issued in response to the allegation, Franken regretted that his "joke" was taken seriously.

Just got a response from @alfranken: "I certainly don’t remember the rehearsal for the skit in the same way, but I send my sincerest apologies to Leeann. As to the photo, it was clearly intended to be funny but wasn't. I shouldn't have done it."

Franken wrote in his book "Al Franken, Giant of the Senate" that it was on this USO trip he first decided to run for Senate. In light of today's revelations, we've dug up several instances of Sen. Franken being a hypocrite and speaking out against sexual assault.