Gowdy Rejects Colleague's Call for a Special Counsel on Hillary 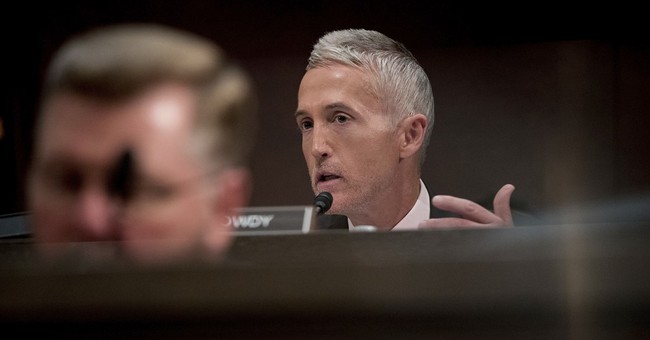 Rep. Jim Jordan (R-OH) had high hopes that Attorney General Jeff Sessions would appoint a special counsel to investigate Hillary Clinton and the Uranium One scandal. His colleague Trey Gowdy (R-SC), while he respects his friend, fails to see the need for it.

The "threshold" just hasn't been met.

Trey Gowdy just shot down Jim Jordan's demand for another special counsel to investigate Hillary Clinton: "I don't think the threshold has been met for an appointment of special counsel" (Fox) pic.twitter.com/TQT0djcTru

Jordan said Sessions had a "come to Jesus" moment after reading his op-ed, cowritten by Rep. Matt Gaetz (R-FL), on the Uranium One deal and how it was screaming for an investigation - not to mention former Secretary of State Hillary Clinton's mishandling of national security intel on her private server. He asks the attorney general to consider a flurry of questions.

Why in 2016 did James Comey and the Justice Department give Cheryl Mills, Secretary Clinton’s Chief of Staff, an immunity agreement for turning over her laptop computer? Typically, the Department would issue a subpoena or get a warrant and seize it. Why in this case did the FBI agree to destroy the laptop?

Why in 2016—one day before the Benghazi report was released and five days before Secretary Clinton was interviewed by the FBI—did Attorney General Lynch meet with former President Clinton on the tarmac in Phoenix?

If Sessions doesn't believe a special counsel is the obvious next step to address the above scandals, he should resign, Jordan and Gaetz write.

Sessions spent Tuesday before the House Intelligence Committee answering questions about the FBI investigation into Russian interference in last year's presidential election, and whether the Trump campaign had anything to do with it.

The short answer from the attorney general? No.