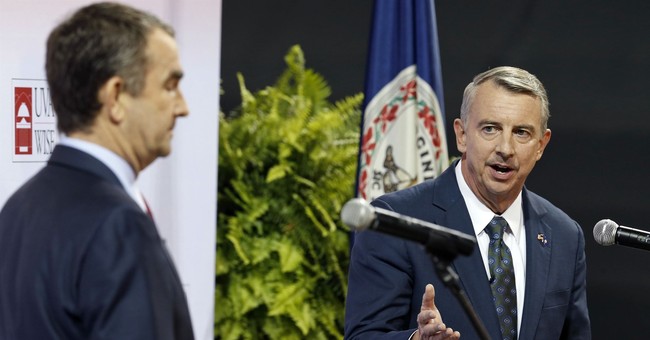 Democrats in Virginia have had a bad couple weeks in these late stages of the gubernatorial race. First, the Ralph Northam campaign was accused of "subtle racism" for removing African-American lieutenant governor candidate Justin Fairfax from some campaign literature. Northam explained the reason for the omission was because a labor union had refused to endorse him.

Then, in a Fairfax County delegate election, Democrats sent out insensitive attack mailers against Republican candidate Lolita Mancheno-Smoak, an Ecuadorian-American. Based on the image, it appeared that the mailer was comparing her to a dog and a fictional serial killer.

In the midst of these PR nightmares, Democrats are now accusing Republican Ed Gillespie of racism. Check out the new flier Virginians are getting in the mail, linking Gillespie and Trump to the violent white nationalist rally in Charlottesville.

In the mail ad that surfaced Tuesday, images of Trump and Gillespie are superimposed above a photo of torch-wielding white nationalists and a message saying Virginians have an opportunity to “stand up to hate” in the election that’s now less than two weeks away.

The back of the mailer — which features a photo of the entire Democratic ticket, made up of gubernatorial nominee Ralph Northam, lieutenant governor nominee Justin Fairfax and incumbent Attorney General Mark Herring — says that on Nov. 7, voters can “stand up to Trump, Gillespie and hate.”

“The tragic events in Charlottesville shook our entire state," the campaign said. "Virginia was invaded by white supremacists and neo-Nazis and Virginians rallied together against their hate,” Gillespie campaign manager Chris Leavitt said in a statement Tuesday night. “To now see Ralph Northam and the Democratic ticket exploit imagery from that tragic weekend to try to score political points is both outrageous and beneath the dignity of the offices they seek.”

It's not a surprise Virginia Democrats are stooping to this level, considering Gillespie is quickly closing the gap with Northam.

When current Virginia Gov. Terry McAuliffe was asked to respond to the mailer, he defended it.

"They are bringing hatred, fear, and bigotry to our state," he said of the Republican ticket.