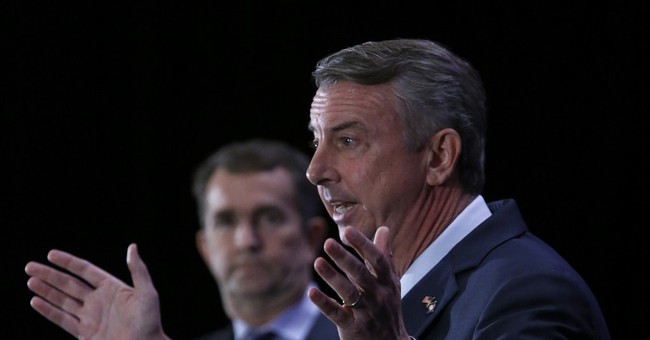 The ad, produced by Gillespie's campaign, reminds voters how Gov. Terry McAuliffe (D) decided to restore the voting rights of nearly 200,000 felons suspiciously just a few months before the 2016 presidential election. It was, he said, his "proudest achievement" as governor.

Gillespie's ad hits Northam for being complicit in the decision.

Northam hit back on Twitter, telling Gillespie that those former prisoners had served their time and had every right to vote and he should be "ashamed" for the ad.

All law-abiding Virginians who've served their time should have their rights restored. Ed knows that. He should be ashamed. https://t.co/h4cInhRjMR

Gillespie responded with the following anecdote.

Gillespie ends the ad noting that he has gained the endorsement of Virginia law enforcement.

In addition to whether felons should have voting rights, the gubernatorial contenders have been battling over health care, tax reform, and Confederate statues. Gillespie has also recently stepped up his attacks on Northam's pro-sanctuary city votes and placed them in the context of dangerous MS-13 gangs. President Trump accused Northam of "fighting for" the gangs on Twitter and Gillespie took the line of attack from there. The issue seems to resonate with voters based on his narrowing Northam's lead. The two men are running about even.