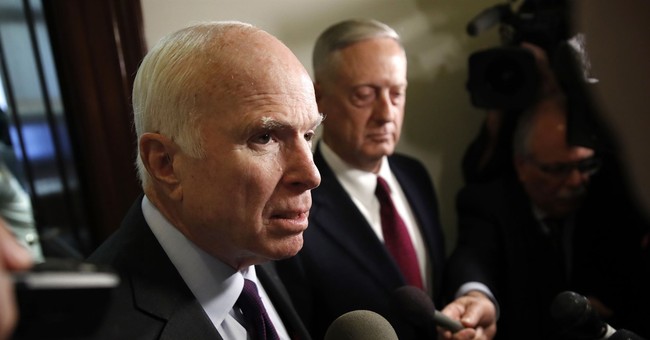 It's been 50 years since Sen. John McCain (R-AZ), then a naval aviator, was shot down over North Vietnam and taken prisoner for five years. In that harrowing time, he suffered at the hands of his torturers. It's why he has consistently opposed the U.S.'s use of enhanced interrogation techniques.

In a recent interview with C-SPAN reflecting on his Vietnam experience, McCain made some remarks that are being interpreted by some as a slam on President Trump. In his conversation with the outlet, the senator regretted that many wealthy Americans managed to dodge the war draft.

"One aspect of the conflict, by the way, that I will never ever countenance is that we drafted the lowest-income level of America, and the highest-income level found a doctor that would say that they had a bone spur," he said.

McCain's comments sounded as though they were directed toward President Trump because the latter received a handful of military deferments in the 1960s, one of which was for a bone spur.

"The View" hosts asked McCain during his guest appearance Monday if he was talking about the president. The senator said that he does not consider Trump a draft dodger, but he did rail against the system.

If McCain had directly attacked Trump, there's no doubt the president would be tweet ready. When he was a presidential candidate, Trump suggested McCain was not a war hero because he had been captured. Trump also has a vendetta against McCain for voting against the GOP's effort to repeal and replace Obamacare, and, more recently, for criticizing the president's "half-baked, spurious nationalism" foreign policy.