Huckabee Sanders: If She Wasn't a Trump, Media Would 'Thank God' for Ivanka 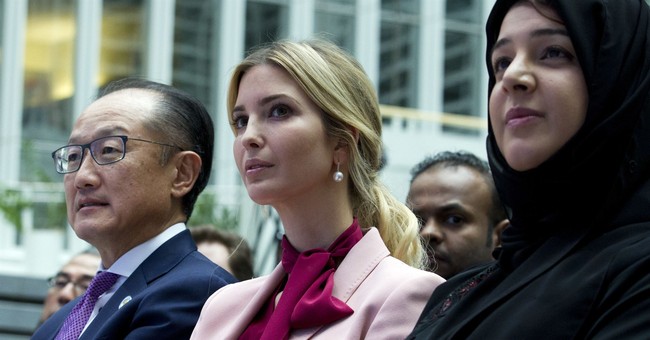 White House Press Secretary Sarah Huckabee Sanders, the first mom to ever hold that title, spoke with radio host Hugh Hewitt Tuesday morning about how far women have come in the workforce, particular in the field of journalism, and in the West Wing. Yet, it often seems that conservative women don't exactly get the praise they deserve.

First daughter Ivanka Trump is a prime example of a powerful female leader who is doing some important work. Yet, she continues to be dismissed and demeaned in the press. If she had a different last name, Huckabee Sanders mused, Ivanka may have had a nicer welcome.

"I frankly, I think it’s shameful the way that she’s been treated," Huckabee Sanders told Hewitt. "If she didn’t have the same last name, they would be celebrating her. They would be praising her. They would be thanking God that she is sitting in a position that she is to influence policy and help women across this country. And instead, they attack her, they shame her, and they belittle her. I think it’s very shameful, and I think it’s sad, because she’s such a good advocate for so many women. And for them to attack her, I think, is just really disheartening."

The press secretary said the press could start by acknowledging Ivanka's "great job" working with the World Bank and encouraging female entrepreneurship. She has also signaled plans to get to work on beneficial family and child care policies.

No, the media is much more apt to praise Chelsea Clinton. Social media users have had a field day joking about how the press seems to want to know her opinion on just about every matter of public policy. Other outlets have 'oohed and aahed' over her fashion sense, all with the intent of making Chelsea "a thing."

The media's obsession with Chelsea but indifference or callousness toward Ivanka is par for the course for the women who surround President Trump. While they fawn over Chelsea's outfits, they question First Lady Melania Trump's footwear and it becomes a political lightning rod. Kellyanne Conway became the first woman to lead a successful presidential campaign and should have been commended and profiled all over the media circuit, but she received little fanfare.