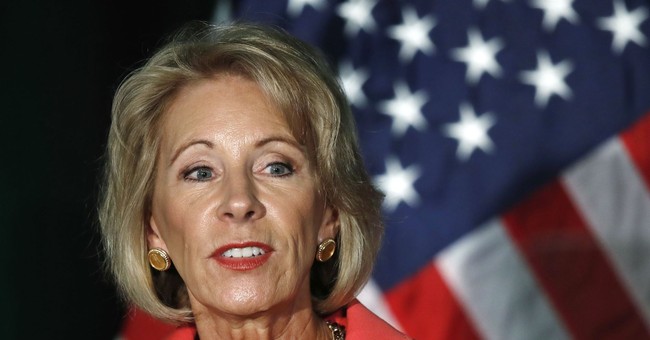 Education Secretary Betsy DeVos is overturning some of President Obama's unfair Title IX regulations that circumvented the due process rights of students. School administrators, however, don't exactly see it that way. A nationwide effort is now underway to resist the Trump White House's latest education initiative.

"Regardless of this new DOE action and interim guidance . . . we will not waver in our commitment to Title IX and its protections,” said California State University, Northridge President Dianne Harrison in a statement. She added that current policies adhere to the state law and executive orders and will remain in place.

Yeah, except, as the Wall Street Journal editors note, universities "don’t get to pick and choose which Department of Education guidance to follow."

With the Title IX reforms, the Education Department is not turning its back on victims of sexual assault. DeVos made that very clear during her appearance at Harvard University's Kennedy School of Government.

"One sexual assault is one way too many," she said.

Yet, she and the Trump administration at large want to assure that the accusers are afforded the same rights as the accused.

In fact, the WSJ suggests that schools should be thanking DeVos for not going through on her initial plans. The education secretary, they write, softened the reforms to give schools an easier implementation. For instance, instead of enforcing a “clear and convincing evidence” standard, she is allowing accusers to still use the “preponderance of evidence” standard.

Teachers and students have thanked her by accusing her of being an arm of the white supremacist movement and of "protecting rapists."