Democrats 'Throw Tantrum,' Skip VA Event Because of a Group They Don't Like 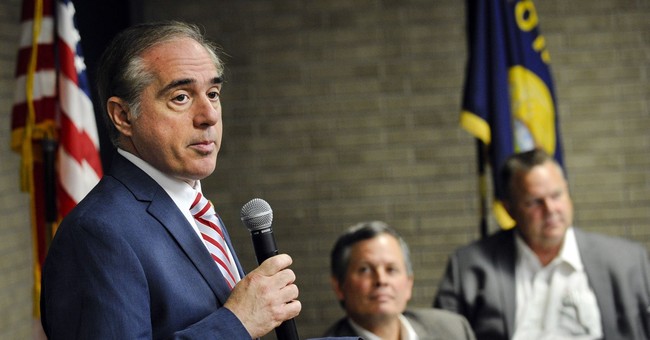 Democrats have had plenty of time to boycott lately. Rep. Seth Moulton (D-MA) refused to recognize President Trump's moment of silence for the Las Vegas victims this week, apparently hoping his protest would spur a debate on gun control.

Then, on Tuesday, Democrats on the House Veterans’ Affairs Committee skipped out on what The Military Times described as a “supposedly friendly roundtable discussion” over how to reform the Veterans Affairs agency.

Why? Because Concerned Veterans for America was there – and the group has ties to Republicans.

“The chairman has the right to invite any organization he pleases, but to pretend that CVA is anything other than a partisan organization that invests time and money into discrediting Democratic members of Congress, and specifically the ranking member of this committee, is disingenuous,” said Griffin Anderson, press secretary for the committee’s Democrats.

The Democratic representatives are especially concerned by CVA's targeting of congressmen like Tim Walz (D-MN), who was the subject of one of the group's campaigns earlier this year after he voted against a plan to fund the Choice program.

Yet, CVA Policy Director Dan Caldwell, along with many representatives for veterans’ causes, was disappointed that Democrats were making this week's VA discussion a political item. Their boycott shouldn’t be the story and they may be jeopardizing an important policy initiative. Perhaps they should have talked like adults, instead of throwing a tantrum, he suggested.

.@VetAffairsDems had a chance to tell CVA to our faces why they disagree with us but they threw a tantrum instead.https://t.co/67y8v8Kvo7

“We are disappointed that some members of the committee chose not to attend this meeting and hear our ideas to reform and fix the VA," Caldwell emphasized in a statement Wednesday. "We have a personal stake in ensuring the VA is improved, as many of our staff and volunteers use the VA – including some who were wounded in combat. We have worked for years to develop comprehensive and bipartisan solutions to the VA's problems and appreciate that Chairman Roe invited us to this event."

Recommended
'We Have Precedent': Klobuchar Points to a Little-known Impeachment Case
Beth Baumann

The VA has run rampant in recent years. Centers around the country are plagued by long wait times, unsanitary conditions, and downright disrespect toward our vets. The Choice program is the only initiative offering veterans health care options outside of the VA, and it is on course to run out of money by this winter. You'd think every member of the House Veterans’ Affairs Committee, regardless of party, would show a bit more urgency.