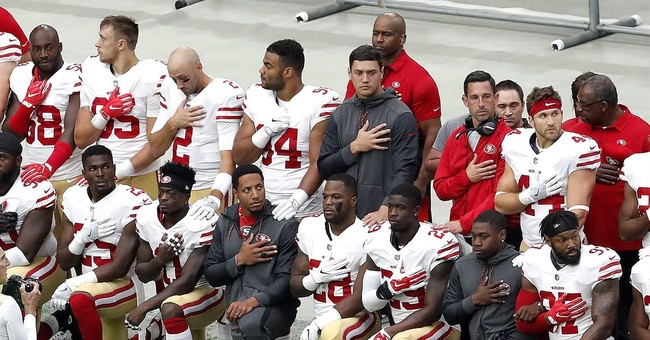 ESPN was not planning on airing the national anthem at Monday night's game between the Washington Redskins and Kansas City Chiefs. It was by all accounts going to return to its "new, normal practice" of highlight match ups and story lines in lieu of the anthem.

Before the season began, the network had decided not to show the anthem, with two exceptions. One was the “Monday Night Football” season opener that fell on the 16th anniversary of the Sept. 11 terrorist attacks and featured a special tribute at the Minnesota Vikings’ U.S. Bank Stadium. And then last week, after protests popped up across the country in response to tweets and comments by President Trump, ESPN pivoted to carrying the anthem preceding the Dallas Cowboys’ game against the Arizona Cardinals. Cameras captured Cowboys owner Jerry Jones taking a knee along with coaches and players, then rising and standing with arms linked for the anthem.

However, with the shooting in Las Vegas Sunday night, the producers have made another exception. In addition to airing the anthem Monday, ESPN will also televise the moment of silence in Arrowhead Stadium.

Fifty-eight people are dead and over 500 are injured, making the Sunday night massacre the deadliest shooting in U.S. history.

This is a time for national unity. It is not the time for a debate on gun control, as White House Press Secretary Sarah Huckabee Sanders informed the press room today, nor a national anthem protest. In light of Sunday's terror, I would seriously question any player who decides to take a knee tonight - unless it is to pray for the Vegas victims.