Drew Brees Had the Best Take on the NFL Protests 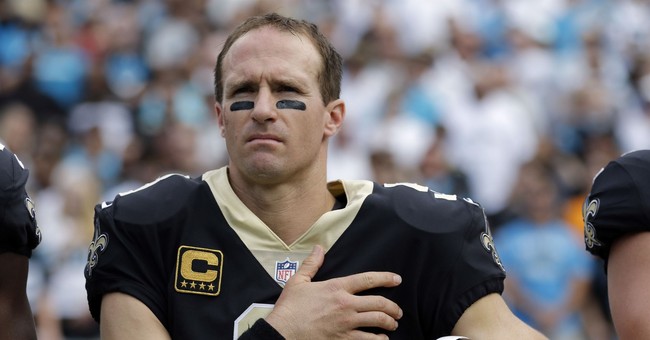 Like many NFL players, New Orleans Saints quarterback Drew Brees was offended by President Trump's strongly worded and profanity-filled rebuke of football players kneeling during the playing of the national anthem. Trump's calling those protesting players SOBs, Brees noted, is "unbecoming" of the office. However, Brees doesn't believe that taking a knee is the most effective method of responding to the president's remarks.

There are ways to protest POTUS, he said at a post-game press conference in Charlotte, N.C. Sunday, while still showing respect for the flag. After all, standing together to honor the anthem is a symbol of unity in itself.

“Looking at the flag with your hand over your heart is a unifying thing that should bring us all together and say, ‘You know what, we know what things are not where they should be, but we will continue to work and strive to make things better and bring equality to all people.’ … I will always believe that we should be standing and showing respect to our flag with our hand over our heart.”

“I will never say it’s OK to not show respect to the flag of the United States of America during the national anthem,” Brees said. “That is the symbol of showing respect to our country. I won’t. I don’t think that that’s OK because of all who have fought so hard and died and sacrificed so much for us to have the things we have, to have the freedoms that we have. The very freedom of the speech that we are talking about was born from that flag.”

His sentiments about Old Glory are never going to change.

“I will always feel that if you are an American the national anthem is an opportunity for us all to stand up together, to be unified and show respect for our country and to show respect for what it stands for,” the Saints player said.

Bravo. Yes, Trump's words were rough, but refusing to stand for the men and women who fought for our freedoms is downright wrong.