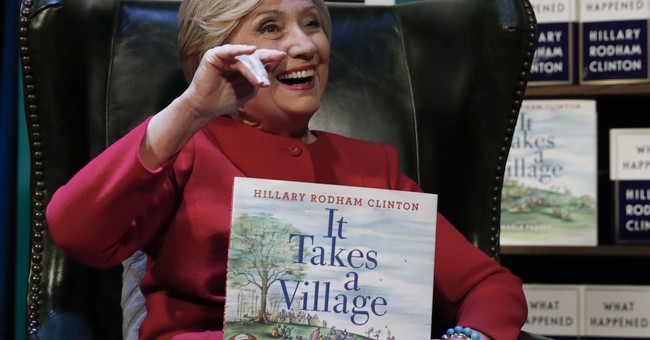 Contrary to rumors and reports, former Democratic presidential candidate (and author) Hillary Clinton is not contesting the 2016 results, she said on "The Late Show with Stephen Colbert" Tuesday night.

She told Colbert she started asking the question, "What Happened" at midnight on Election Night - "the dark time of the soul." Having since recovered from that moment, she has penned her new book for some reflection.

The host wanted to know if the rumors were true - if she was searching for a way to challenge the election results.

"Nobody's talking about contesting the election, including me," Clinton said. "There is no mechanism."

Yet, that doesn't mean she is no longer going blame others for What Happened.

"It wasn’t easy. It was painful. It was horrible, reliving it. And, you know, being as candid, open as I could be about the mistakes I made, and talking about those. But also trying to come to grips, as I write in the book, about everything from sexism and misogyny to voter suppression to the unusual behavior of the former Director of the FBI, and the Russians. And the Russians."

Asked to elaborate on that last part, Clinton was adamant that the Russians "succeeded" in influencing voters.

She also gave herself a new nickname in her fight to expose Putin - although not one that Trump would likely have bestowed. (In fact he was back to calling her "Crooked" this morning.)

When Clinton and Colbert finished up their discussion about the legitimacy of last year's election, Clinton condemned Trump's UN speech on Tuesday, where he sent threats to the likes of North Korea, Iran and Venezuela, as "dark and dangerous." It is "not the kind of message" America should be delivering.

Instead of escalating conflict, the president should "lead with diplomacy," she said.