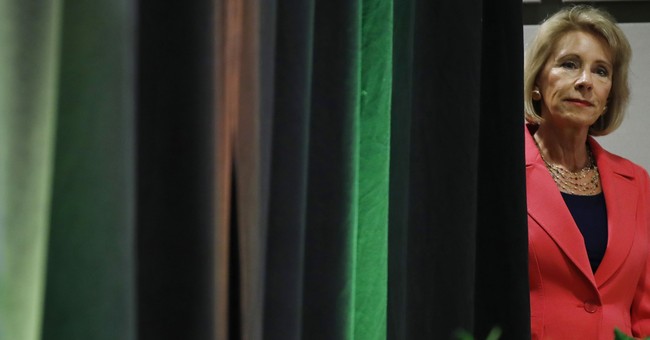 Education Secretary Betsy DeVos is receiving threats after she announced changes to the Title IX program Thursday as it was known under President Obama. Sexual assault abusers are still going to be punished, she emphatically stated, but from now on the accused will be offered due process.

"One university leader was rightly appalled when he was asked by an Office for Civil Rights official: 'Why do you care about the rights of the accused?'" she said.

With the Trump administration changes, sexual abuse cases will now be based on a notice-and-comment process. As for accusers, they will now have to provide more proof of guilt, instead of just a "preponderance" of guilt.

Protesters outside of DeVos's speech at George Mason University accused her of protecting rapists.

The worst offenders came on Twitter though. Some said DeVos's changes are the next step toward authoritarianism.

Then there was Texas lawyer Rob Ranco, who told the world he would have no issues with DeVos being the victim of sexual abuse. He has since deleted his account.

So looks like @rancolaw deleted his account. I guess wanting a federal official to get sexually assaulted has consequences. pic.twitter.com/THl5ucm8lB

“She’s made the world more dangerous for my daughters," Ranco later explained. "I need her to understand.”