Florida AG Calls Out 7-Eleven After It's Caught Price Gouging 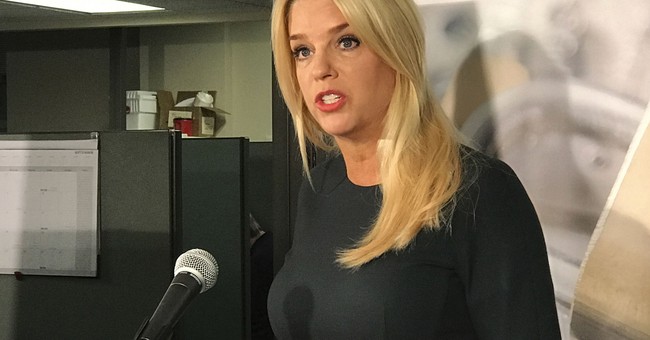 Florida Attorney General Pam Bondi has put companies on notice. Get caught price gouging Floridians during Hurricane Irma, and expect to be called out on live TV. She already made good on her threat Saturday morning, when she told Fox News how 7-Eleven had taken advantage of needy residents.

Her offices have established hotlines for residents to call if they witness any egregious examples of price gouging.

I have offices in Tallahassee & across the state open to take calls about price gouging during this state of emergency—866-9NO-SCAM. pic.twitter.com/14VMBhbxhJ

Bondi says she has received thousands of complaints so far, one of which was how 7-Eleven was selling water for an outrageous $30 a pack, instead of individual bottles.

"When I see babies, when I see women, when I see children, when I see elderly people who cannot afford a $30 bottle of waters, that's illegal," Bondi told Michael Smerconish on CNN. We will fine you $1,000 every violation. Up to $25,000 every single day. And I will be saying your name all over this country. Not to do business with you again."

To the company's credit, after 7-Eleven got an earful from Bondi, they donated $150,000 to the Red Cross and transported free water into Florida.

Texans faced similar price gouging in the wake of Hurricane Harvey. Reports revealed that businesses were charging $99 for a case of water, hotels were hiking their prices and stations were charging fuel at $4 to $10 a gallon.

All eyes are now on Irma, as over 5 million Floridians leave the state under mandatory evacuation before the storm makes landfall Sunday morning.