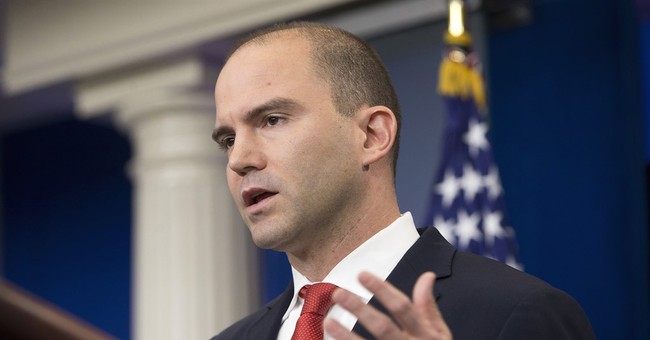 Former Obama Deputy National Security Advisor Ben Rhodes joined ABC's "This Week" over the weekend. Host George Stephanopoulos fed him plenty of questions about President Trump's handling of the tragedy in Charlottesville and the escalating threat from North Korea. As such, Rhodes had plenty of opportunity to bash the current president's domestic and foreign policies.

Unlike his predecessors, Trump has "surrendered the moral authority" of the presidency with his weak response to the Charlottesville tragedy, Rhodes argued. He also accused the White House of "manufacturing a crisis" with North Korea.

One topic Stephanopoulos noticeably overlooked? The unmasking that Obama's intelligence officials engaged in to supposedly spy on the Trump campaign.

Did Rhodes get asked about unmasking?! Perfect opportunity. https://t.co/W6AadDHOS6

Obama National Security Advisor Susan Rice was exposed as a central figure in the unmasking scandal. She initially feigned not to know anything about it. Two weeks later, she clarified that not only did she know about the unmasking of Trump transition officials and their meetings with foreign leaders - it was part of her job. Yet, she insisted that she only oversaw the unmasking of names to protect the American people and she had nothing to do with the "leaks" coming out of the White House.

Rhodes then became another "person of interest" in the investigation in August. It made sense, Hot Air notes, since he was Rice's right hand man.

It's juicy stuff, but Stephanopoulos and other members of the mainstream media are clearly much more interested in the Trump administration scandals.

Chairman of the House Intelligence Committee Devin Nunes has asked for a list of the unmaskings Rhodes dealt with from Jan. 1, 2016 to Jan. 20, 2017. He has reason to believe that hundreds of Americans were targeted.