Missouri AG Plans Run Against McCaskill, But Another Republican Steals His Domain Name 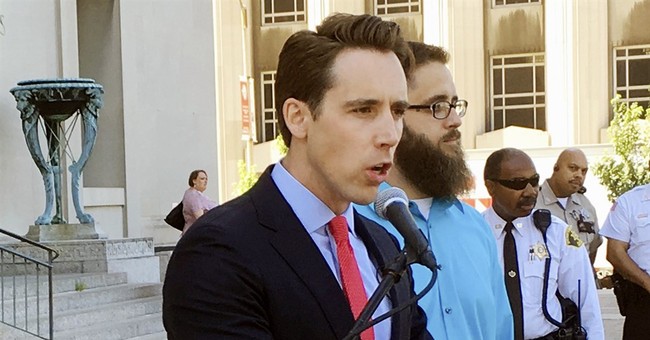 Missouri Attorney General Josh Hawley recently announced his plans to form an exploratory committee and challenge Sen. Claire McCaskill (D). The Democrat's campaign has already gotten off to a rocky start, however, as he seemingly failed to register his domain name.

That's when Republican candidate Austin Petersen came in and seized the opportunity to take over joshhawley2018.com. On the site, Petersen's campaign plays one of Hawley's campaign ads from last year in which he calls out “career politicians.” Petersen then points out Hawley’s hypocrisy, considering he waited only six months to run for an office in Washington.

Last year, Josh Hawley attacked “career politicians” for “climbing the ladder.” Now, he’s exploring whether to run for the US Senate — just months after being elected Attorney General.

McCaskill’s campaign manager David Kirby also criticized Hawley for prematurely looking past his tenure as attorney general, becoming one of those “ladder-climbing politicians” himself.

“That’s exactly what Missourians can’t stand about politics — it represents the worst kind of politician, and calls into question what other promises Josh Hawley will break,” Hawley said.

McCaskill, the Kansas City Star notes, is one of the most vulnerable Democrats running next year. After all, she hails from a red state that heavily voted for Donald Trump in last year's presidential election. Knowing the odds are in their favor, Republicans are coming out of the woodwork to take advantage of the opportunity.

Petersen didn't just steal Hawley's name - he has his own campaign website as well. You can check that out here.