Trump Answers Questions About the Wall While Sitting Beside Mexican President 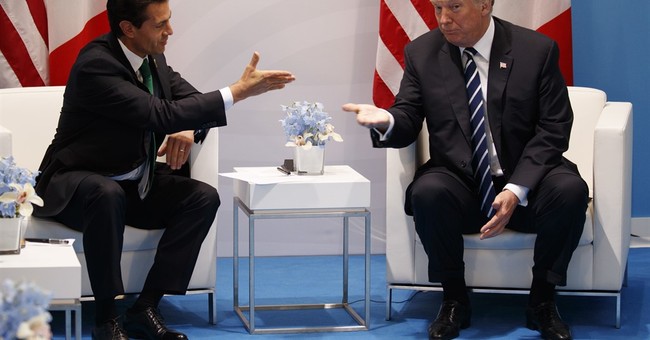 At Friday’s G-20 summit in Hamburg, Germany, President Trump fielded questions about his long talked about plans to construct a wall along the U.S.-Mexico border to stem the flow of illegal immigration. He did so sitting right next to Mexican President Enrique Peña Nieto.

Does he still plan to build the wall – and does he still want Mexico to pay for it, reporters wondered.

"Mr. Trump, do you still want Mexico to pay for the wall?"

The two did not discuss the border wall privately, according to Nieto's spokesman. Yet, Trump’s wall blueprints have been a source of tension between the two leaders in recent months. In January, it was believed that Nieto canceled a meeting with Trump because of the policy, particularly his demands that Mexico is going to foot the bill.

"Mexico does not believe in walls,” Nieto said at the time. “I've said time again; Mexico will not pay for any wall."

Despite Mexico's objections, Department of Homeland Security Secretary John Kelly predicted that construction on the border wall will begin by the end of the summer. Attorney General Jeff Sessions was also under the impression that some of the funds will come from Congress.

Immigration chatter aside, Trump and Nieto reportedly had a productive meeting Friday, especially in regards to their discussions on NAFTA.