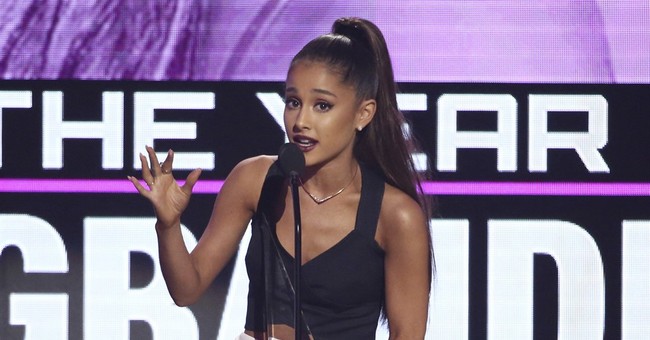 An explosion appeared to go off during an Ariana Grande concert in the United Kingdom's Manchester Arena Monday night. Video captured the moment concertgoers were sent fleeing. The artist herself is reported to be fine, according to her spokesperson. Sadly, several audience fatalities have been recorded.

Authorities are on the scene investigating what they say is a "serious incident."

Emergency services responding to serious incident at Manchester Arena. Avoid the area. More details will follow as soon as available

UPDATE: The Greater Manchester Police has confirmed "a number of fatalities."

NBC News: Law enforcement officials say at least 20 dead and hundreds have been injured following reports of an explosion in Manchester, UK.

UPDATE (7:32 p.m. ET): In the chaos following the explosions, more than 50 children are currently stranded at a nearby Holiday Inn.

Please retweet: For anybody searching for their child in #Manchester, check the Holiday Inn. pic.twitter.com/aRqW4Pk7OA

UPDATE (8:23 p.m. ET): The incident is being treated as a terror attack, according to police.

UPDATE (9:24 p.m. ET): More information related to the location of the explosions.

At least one explosion happened in the foyer of the arena, not the main event hall, according to the British Transport Police, the force that protects Victoria Station, the train terminus next to the arena. The terminal was evacuated.

UPDATE (9:52 p.m. ET): Reports indicate that a male suspect is the suicide bomber behind Monday's attack.

Western LEO tells CNN a male at the scene in Manchester has been identified as probable suicide bomber, per @evanperez & @PamelaBrownCNN

UPDATE (9:55 p.m. ET): British Prime Minister Theresa May has released a statement in light of the concert tragedy:

“We are working to establish the full details of what is being treated by the police as an appalling terrorist attack," she said. "All our thoughts are with the victims and the families of those who have been affected.”

May has also announced she will suspend election campaigning for the general election previously scheduled for June 8.

One more update for tonight. Ariana has tweeted the following message.

broken.
from the bottom of my heart, i am so so sorry. i don't have words.