Gorsuch Asks His First Questions as SCOTUS Justice, Gets Compliments from Reuters and the NYT 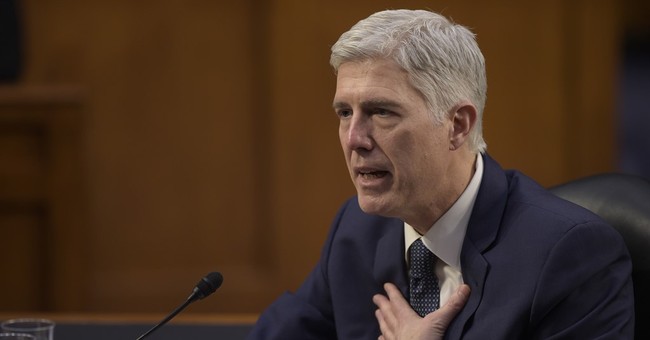 Not only did he ask questions, but he was confident enough in his constitutional prowess to challenge the lawyers in the room.

The case before the justices involved a technical issue about the process for a federal worker to appeal his discrimination claim. Gorsuch asked the worker's lawyer Christopher Landau four questions in a row about the wording of a statute, saying he was "sorry for taking up so much time."

Gorsuch later sparred with Justice Department lawyer Brian Fletcher over the meaning of the Civil Service Reform Act, sticking to his reputation for focusing on the text of the law.

"Wouldn't it be a lot easier if we just followed the plain text of the statute," Gorsuch asked.

Reuters reporters noted Gorsuch's "composure" and "confidence" throughout his first day on the bench. The New York Times had a similarly positive review.

If Justice Gorsuch experienced first-day jitters, he did not betray them. He was an exceptionally active questioner, displaying an easy familiarity with the issues in the minor and technical cases before the court. He asked crisp and colloquial questions, and he kept asking them if he did not find the lawyers’ answers satisfactory.

Perhaps the most anticipated case Gorsuch will hear this week is Trinity Lutheran v. Comer on Wednesday, which will consider whether a religious preschool in Missouri should have access to a taxpayer funded state program that helps improve playgrounds. Religious freedom advocates will be watching that one closely.