GOP Senator Willing to Join Bipartisan Health Care Coalition...As Long As You Don't Call it This 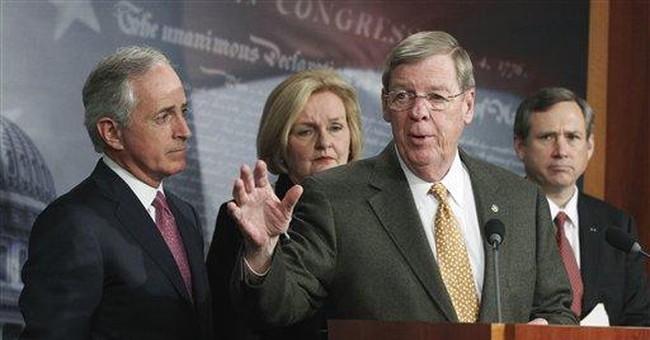 Sen. Johnny Isakson (R-GA) has had a productive couple of days back in Washington since recovering from his back surgeries. On Thursday, he didn't let his stunted gait stop him from getting to the Senate floor. He brought his walker into the chamber to cast a near deciding vote to allow pro-life legislation to proceed.

Isakson also indicated on Thursday that he's ready to get to work - with Democrats if he has to - to fix our broken health care system.

"I don't do gangs," Isakson told The Atlanta Journal-Constitution. "The press has used that as a derogatory term."

The most infamous "gang" in Congress was the "Gang of Eight" in 2013 who attempted to pursue immigration reform. Among the coalition was Sen. Marco Rubio (R-FL), who was chided by conservatives for supporting a component in the bill they viewed as awarding amnesty to illegals. In retrospect, the "gang's" bill appeared to attract more controversy than support.

With so much baggage behind it, you can see why Isakson is leery of the term.

The right title isn't as important as the right people. Isakson noted that he's ready to work with "anybody who wants to contribute to a solution to any problem that we have in the government."