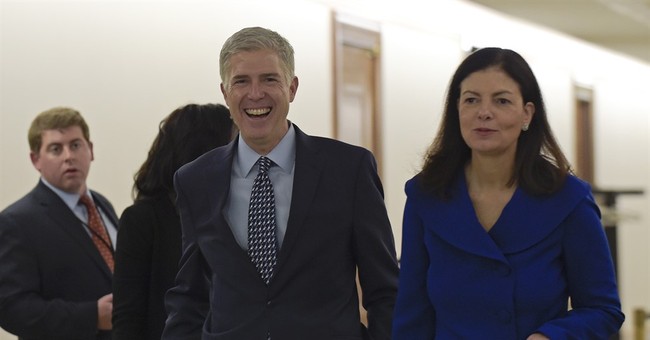 A lot of hubbub is being made about Supreme Court nominee Neil Gorsuch's supposed rebuke of President Trump's behavior toward federal judges. Sen. Richard Blumenthal (D-CT), straight after meeting with the nominee, told reporters that Gorsuch was "disheartened" by the president's treatment of Seattle Judge James Robart. Trump called Robart a "so-called judge" after he filed a restraining order against his executive order on immigration.

Trump challenged Blumenthal's claims on Twitter, arguing we should take the senator's words with a grain of salt since he once lied about his service in Vietnam.

However, a spokesman for Gorsuch reportedly confirmed to CNN that the nominee was indeed disheartened. Former senator Kelly Ayotte, who was hired by the White House to help guide Gorsuch in the nomination process, also used the same words to describe what Gorsuch thought of Trump's Twitter rhetoric against judges who challenge his executive action. She provided the following statement to BuzzFeed News.

Judge Gorsuch has made it very clear in all of his discussions with senators, including Senator Blumenthal, that he could not comment on any specific cases and that judicial ethics prevent him from commenting on political matters. He has also emphasized the importance of an independent judiciary, and while he made clear that he was not referring to any specific case, he said that he finds any criticism of a judge’s integrity and independence disheartening and demoralizing.

As Guy said on Fox News this morning, if this report is true, then it doesn't mean Gorsuch is being "disloyal" to Trump, it simply means he's going to be loyal to the Constitution and practice judicial independence.

Some pundits mused that Gorsuch's distancing himself from President Trump is a smart move, considering it could gain him some Democratic allies who he may need to get confirmed.