Sen. Hatch Tells Colleagues to 'Stop Acting Like Idiots' And Show Up for Cabinet Votes 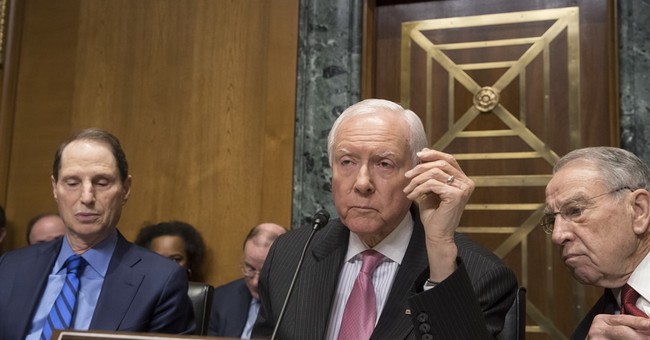 Sen. Orrin Hatch (R-UT) is incensed that some of his Democratic colleagues have decided not to show up for cabinet votes on Tuesday. Democrats are boycotting the confirmation votes for HHS nominee Tom Price and Treasury Secretary nominee Steve Mnuchin.

Orrin Hatch is upset. "I think they ought to stop posturing, and acting like idiots," he says of the decision to skip today's markup.

"I’m very disappointed in this kind of crap," he added. "Let’s not treat people like this."

Hatch mused that some of the boycotters were avoiding the votes simply because they don't like the current president.

Reporters are noting how serious the situation must be, because Hatch is considered one of the most "even-tempered" members in the Senate.

A mad @SenOrrinHatch is kind of frightening, since he is the most even-tempered member of the Senate https://t.co/a72McCAqg4

As a result of the apparent grandstanding, Hatch said he will have to reschedule the votes.

Chuck Todd Tries to Pull 'A Vaccine Mandate is a Pro-Life Position' Argument Ahead of SCOTUS Hearing
Rebecca Downs
Matthew McConaughey Makes An Announcement on Whether or Not He Will Run for Governor of Texas
Rebecca Downs
So, It Looks Like CNN Did Not Learn The Same Lesson WaPo Had to with Tweeting About the Waukesha Tragedy
Rebecca Downs
Legal Experts Have Bad News for Civil Rights Suits Against Kyle Rittenhouse
Rebecca Downs
Dr. Francis Collins Spews Word Salad When Asked By Fox News Reporter About Case Numbers In Florida
Scott Morefield
Enes Kanter to Change Last Name to 'Freedom' as He Becomes U.S. Citizen
Landon Mion
CARTOONS | Bob Gorrell
View Cartoon
Most Popular