Earnest Chides Spicer For Tangling With CNN: I've Never Wanted to Throw Someone Out of a Room 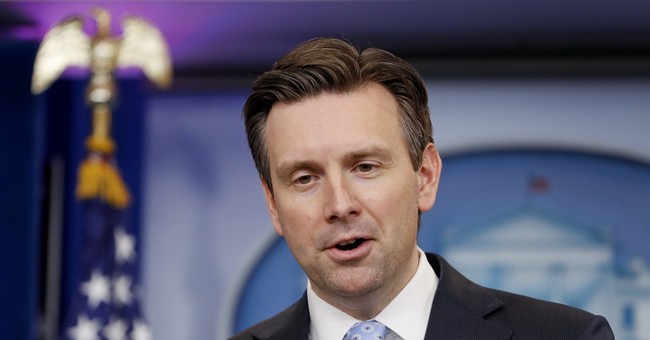 White House Press Secretary Josh Earnest was surprised by his successor's treatment of the press at Donald Trump's fiery press conference on Wednesday. At that presser, Trump rejected a question from CNN's Jim Acosta because they reported on an uncorroborated BuzzFeed dossier. When Acosta kept pressing for a question, demanding that Trump owed CNN at least one, Trump dismissed him as "fake news."

Incoming press secretary Sean Spicer warned Acosta that if he continued to act so belligerently he would be thrown out of future press conferences. At a White House press conference on Thursday, Earnest said that Spicer's behavior was out of line.

“I can never recall a scenario in which I was tempted to throw somebody out of the room,” even when he was most frustrated with a reporter, Earnest said at the afternoon’s daily briefing. “I can certainly say that that's not something I ever threatened to do, even if the thought crossed my mind.”

This is "part of the process," Earnest said, suggesting that Spicer needs to practice a bit more patience.

Yet, some observers are reminding the Obama administration of how they have treated Fox News in the past eight years. The president has called Fox "destructive" and even partly blamed the network for costing Hillary Clinton the election.

So, he and his press secretary are not exactly the best people to give advice to the next administration.

Judging from what we witnessed on Wednesday, it's safe to say more people are going to be tuning into these press conferences the next four years.