Michelle Obama: Trump Tapes Have 'Shaken Me to My Core' 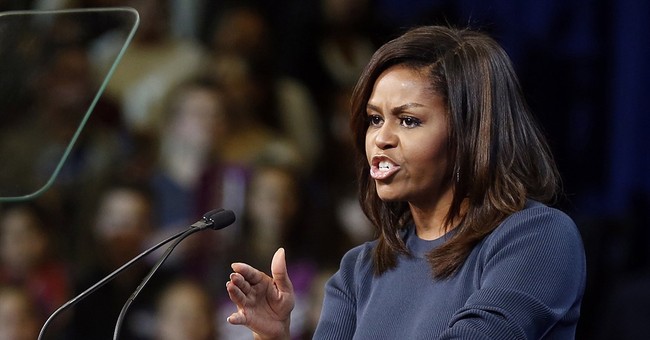 Hillary Clinton told voters that she often takes the advice of First Lady Michelle Obama. "When they go low, you go high," she told voters at Sunday's presidential debate. Well, it's obvious who Mrs. Obama believes has "gone low" in this election.

On Thursday, the First Lady broke her silence on the stunning and vulgar audio recording that sounded a lot like Donald Trump speaking jokingly about sexual assault. The tapes have “shaken me to my core in a way I couldn’t have predicted," she said at a rally in New Hampshire, campaigning for Clinton as we welcome the final few weeks leading to the election.

“We simply cannot endure this or expose our children to this any longer,” she said. “Now is the time for us all of us to stand up and say enough is enough. This has got to stop right now.”

Some pundits surmise that the Clinton campaign deliberately had Mrs. Obama sound off on Trump to bait the GOP nominee into another unflattering public feud.

They sent Michelle Obama out to attack Trump hoping he'd be dumb enough to go after her. Let's see if he takes the bait. (He will.)

The First Lady can claim to take the high ground in this election, but others have been quick to note how Mrs. Obama did indeed "go low" in the 2008 primary when she brought up Hillary's inability to get a handle on her cheating husband.