Obama to Kaepernick: Have You Thought About Military Families? 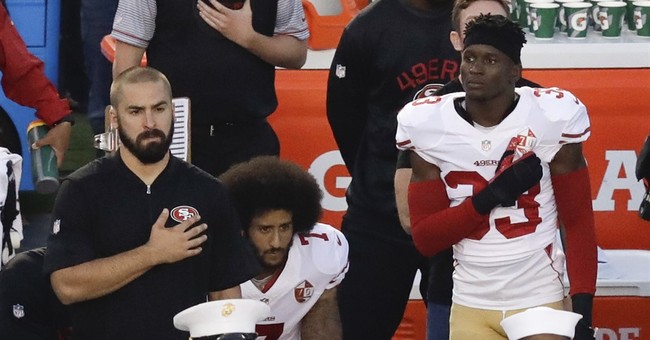 President Obama may be scaling back his initial comments about Colin Kaepernick's national anthem protests. The San Francisco 49ers quarterback continues to kneel during the "Star Spangled Banner" at his NFL games as a means of speaking out against racial injustice. Other football players, as well as athletes from other professional sports, have followed suit.

President Obama weighed in on the controversy at the G20 summit in China earlier this month and offered a measured defense of Kaepernick's right to protest.

"My understanding at least is that he’s exercising his constitutional right to make a statement," Obama said. "If nothing else what he’s done is he’s generated more conversation around some topics that need to be talked about."

Yet, at a CNN town hall with America's armed forces on Wednesday night, the president offered a different perspective. He said that Americans should be sympathetic to Kaepernick's message because many families have been affected by police shootings, yet added that our military families have suffered plenty of their own grief.

“Sometimes out of these controversies, we start getting into a conversation, and I want everybody to listen to each other,” Obama said. “So I want Mr. Kaepernick and others who are on a knee, I want them to listen to the pain that that may cause somebody who, for example, had a spouse or a child who was killed in combat, and why it hurts them to see somebody not standing.”

Obama may have softened his tone a bit considering he was in a room full of service men and women.

For what it's worth, Kaepernick did reportedly at least ask a Green Beret's opinion as to how he could exercise his right to protest the anthem while still showing some amount of respect for America's finest. He concluded taking a knee would be the best option.

Or he could just stand up.