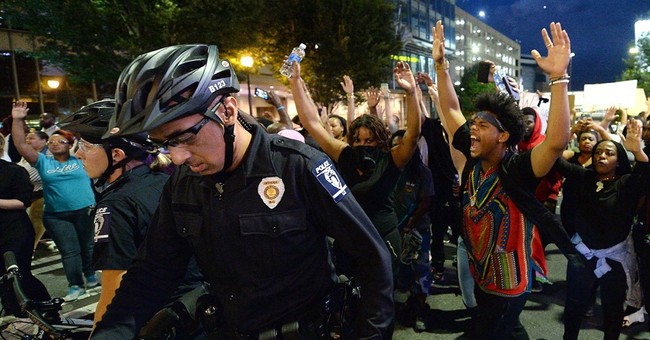 The Charlotte-Mecklenburg Police Department spoke to reporters Thursday morning to provide an update on the state of protests in the city after the police shooting death of an African-American male. One person has been shot and is in critical condition and forty-four arrests have been made after the second night of rioting. Police Chief Kerr Putney said more assets have been employed on the ground to protect local infrastructures and they will "not tolerate" any kind of violent behavior.

The police also offered some new information into the surveillance video from the shooting. The footage does not show the man, Keith Lamont Scott, point his gun at the officers, the chief said. Yet, it "confirms their version of the truth."

Scott's family will be shown the video, the mayor noted. Some activists have demanded the police make the video public in order to be completely transparent. The chief disagrees.

If you think we should display a family’s worst day for public consumption, that is not the transparency we’re speaking of,” Putney said.

Mayor Jennifer Roberts said the past 48 hours is not Charlotte. Willie Ratchford, the executive director of Charlotte Community Relations Committee, agreed, insisting Charlotte is a place for people to "come together in peace."

Although Gov. Pat McCrory has issued a state of emergency, the city is "safe" and businesses are operating as usual, according to the mayor.

"We don't see a need to shut the city down at a specific hour," the police chief added.