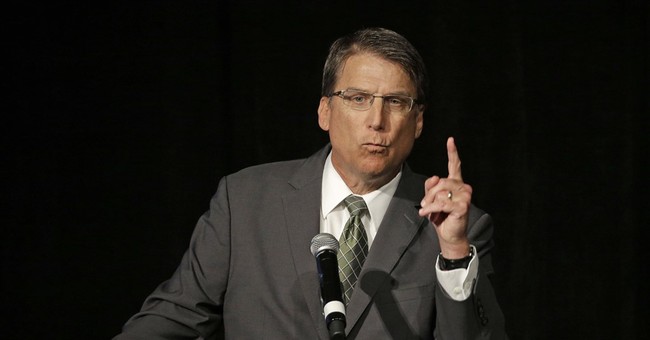 Gov. Pat McCrory (R-NC) has not moved an inch over his support of HB2, legislation that prevents those who identify as transgender from using public restrooms that don't match the gender on their birth certificates. The bill has hurt North Carolina financially as some businesses have condemned it as discriminatory. The NBA has been one of the more vocal entities to voice its displeasure. On Friday, the basketball association officially announced it will be moving the All-Star final from Charlotte to New Orleans, Louisiana in a form of protest against the legislation.

The decision may prevent North Carolina from raking in some serious cash, but in a new statement Family Research Council President Tony Perkins gave McCrory a standing ovation for not bowing to political pressure.

"I commend North Carolina Governor McCrory for his political courage and moral clarity in not caving in to the NBA's threats to move the All-Star game. He stared down the giant of the NBA and stood strong against government discrimination of private entities and for the principles of protecting privacy and safety in government buildings.

Perkins also pointed out the NBA's hypocrisy in refusing to play basketball in Charlotte, yet having no qualms stepping on the court in the People's Republic of China, where human rights are routinely suppressed.

The NBA has, however, made at least one good decision this week. The association announced it will be assisting in the Louisiana flood relief efforts ahead of the big game.