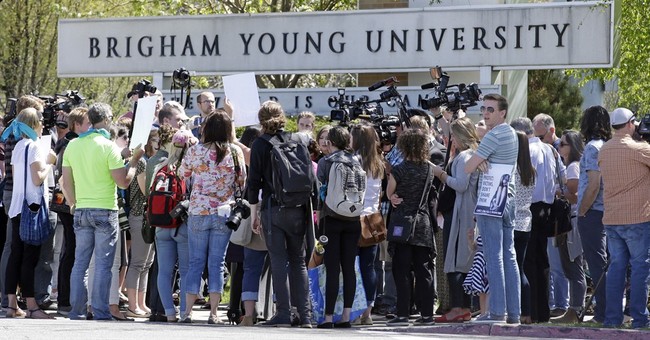 Several LGBT groups are currently on a mission to demonize Brigham Young University as a discriminatory institution and effectively prevent it from being admitted into the prestigious Big 12, a collegiate athletic conference. Led by Athlete Ally, the groups sent a letter to the conference demanding it not consider BYU's entrance. The religious school, owned by The Church of Jesus Christ of Latter-day Saints, asks its students to recognize its Honor Code. This code, LGBT activists argue, is the source of the school's discrimination.

That kind of language raised "red flags" for Athlete Ally executive director and founder Hudson Taylor, one of the letter's authors. In an interview with the Daily Herald, Taylor said he respects the rights of faith-based schools, but its policies clearly don't belong in the Big 12 and he has asked the conference to reject BYU's candidacy.

While LGBT groups may bristle at such language, BYU is a private religious institution that has a long tradition of upholding these ideals. Now those principles are under attack.

While the Big 12 Conference hasn't agreed to the letter's request, Commissioner Bob Bowlsby did say they would take it into consideration.