Gowdy: Lynch Hearing Was a Waste of Time 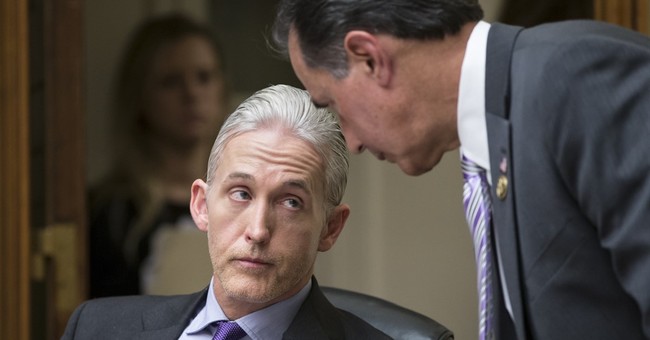 In case you weren’t aware, lawmakers were not happy with Attorney General Loretta Lynch’s sanitized script at Tuesday’s House Oversight Committee hearing. One congressman even told her he misses Eric Holder.

“She could have answered every one of those questions,” Rep. Trey Gowdy (R-SC) said on Fox News Wednesday morning, noting there’s “no grand jury prohibition” to prevent her from offering real responses. Yet, she failed to provide “yes” or “no” answers, instead falling back on clearly scripted responses that offered no insight into the FBI’s investigation into Hillary Clinton’s emails.

The congressman has a pretty good reason why Lynch was so uncooperative.

“We asked her to apply the facts to the law…The facts are embarrassing for her presidential candidate.”

Should Lynch have agreed that Clinton jeopardized national security and lied about sending classified information on a private email server, she would have then been confronted with inquiries into why she didn’t indict her.

The “only reasonable interpretation” of her refusal to answer their questions was that she was protecting Clinton, Gowdy concluded.

Gowdy and his colleagues may not have liked FBI Director James Comey’s conclusions last week not to indict the former secretary of state, but at least he answered their questions.

As for that half hour meeting between Bill Clinton and Lynch a few weeks ago in Phoenix, which was obviously a conflict of interest, Gowdy provided another easy explanation.

“If you’re powerful and you have the right last name then you can do things the rest of the world can’t do,” he said. “That’s why no one trusts the justice system.”

“It was completely unforced error.”