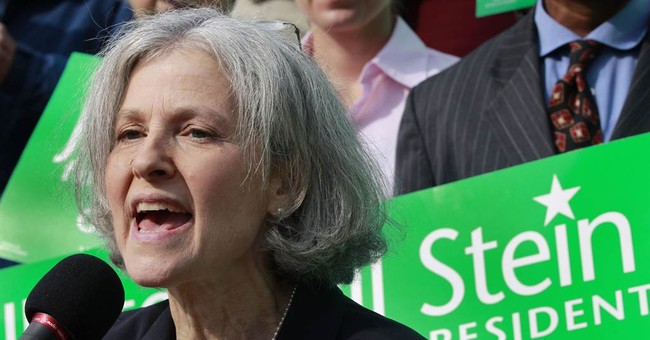 We all know that Bernie Sanders supporters have their reservations about Hillary Clinton. In that context, many of them may likely welcome Green Party candidate Jill Stein as a possible “Plan B.” Politico reports on her rising star power.

The longtime Massachusetts environmental activist and presumptive Green Party nominee (the Green convention is not until August 4) is hungrily eyeing disgruntled Sanders voters—many of whom have been saying that even now, with the nomination all but locked up, they still won’t vote for Hillary. And Stein appears to know her audience, declaring on CNN right after the California primary that she represents “a plan B … to continue to fight that revolution.”

Politico admits Stein is still a “blip” in the 2016 election, but she is gaining some traction in the polls and, significantly, is expected to be on 47 state ballots this election year.

I continue to climb in each new poll that includes me. Add your name to keep it going: https://t.co/0hHg2o7hOE ?? pic.twitter.com/9o1HNk9W1z

What’s more, in the Real Clear Politics average, when Stein is added to the presidential polling along with Libertarian party candidate Gary Johnson, Clinton’s lead is bumped down to just under 5 percent.

Like Sanders, Stein is not afraid to expose Hillary Clinton’s record of promoting anti-progressive policies.

In such a partisan election, any source of lost votes could make the difference between a Hillary Clinton presidency or a Donald Trump presidency.