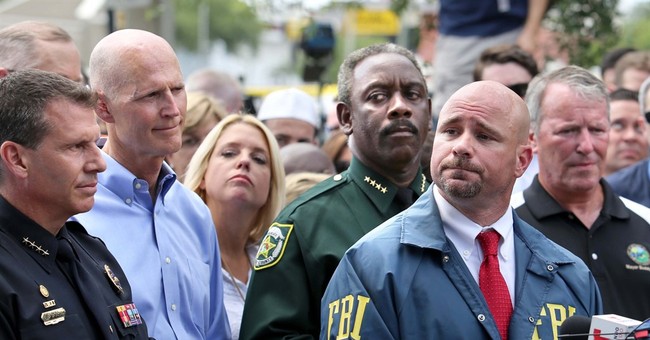 By now you’ve seen the disgraceful line of questioning CNN anchor Anderson Cooper chose for Florida Attorney General Pam Bondi after the tragic Orlando massacre last weekend. Intent on shaming Bondi for her past anti-gay marriage remarks, Cooper asked her repeatedly to explain why she thought gay marriage would harm Florida society. In so many words, he wondered how Bondi could truly condemn the attack on the gay nightclub Pulse with her history of opposing gay marriage. It was an oddly partisan exchange from the usually neutral journalist.

On Wednesday morning, CNN’s Carol Costello noted that Florida Gov. Rick Scott is also being accused of “underplaying” the fact that the Orlando terrorist had targeted the LGBT community in his heinous crime.

Like Bondi, Scott got “grilled” on his gay rights record, Costello noted. Media outlets are also criticizing the governor for “refusing” to utter the words “gay” or “LGBT” in his reaction to the murders.

This criticism is unjustified. As soon as Gov. Scott learned of the Orlando massacre, he condemned it as an act of terror, issued a state of emergency and insisted that Floridians will unite after the tragedy and that law enforcement would be “swift in their justice.”

Yet, his omitting the word “gay” proves he doesn’t care about the victims, liberal commentators argued.

On Tuesday, Scott laid flowers at a makeshift memorial for the victims and clearly identified the victims’ sexuality.

Yet, that still wasn’t enough for his critics, who suggest it was too little, too late.

Who, exactly, is preventing unity in this tragedy?