WH Mocks Sen. Cotton’s Concerns About Iran Heavy Water Purchase: ‘Maybe He Should Write Another Letter to the Supreme Leader’ 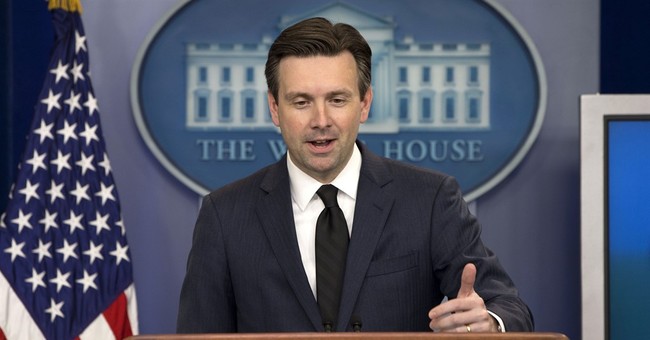 “It’s not radioactive,” he said. “It doesn’t pose a public health concern. It is valuable.”

More generally, he added, the purchase is “consistent with Iran fulfilling their obligations” under the nuclear agreement.

Conservative members of Congress, however, have decried the White House’s dangerous purchase. Sen. Tom Cotton (R-AR) even filed an amendment to halt the process.

“It seems the president will go to any lengths to protect his nuclear deal,” Cotton said in a statement. “We’ve given the terror-sponsoring Iranian regime enough concessions at the risk of our security; we should not further subsidize its enrichment activity by making repeated purchases of this material."

When a reporter asked Earnest to respond to Cotton’s urgent request, the press secretary both mocked and dismissed him. If Cotton has an issue with the development, maybe he should “write another letter to the Supreme Leader and see how far that gets him,” Earnest replied. He was referring to a letter Cotton and 46 other senators sent to Iran’s supreme leader in March with the intention of halting the White House’s nuclear deal.

The press pool both grimaced and laughed awkwardly at the press secretary's remark.

Earnest’s arrogant retort is indicative of a White House that cannot accept criticism. President Obama and his advisers refuse to listen when world leaders and foreign policy experts tell them how dangerous this nuclear deal will prove to be in the long-term.

But, how dare these individuals voice their concerns.