Was Obama Able to 'Appease Tensions' in Saudi Arabia? 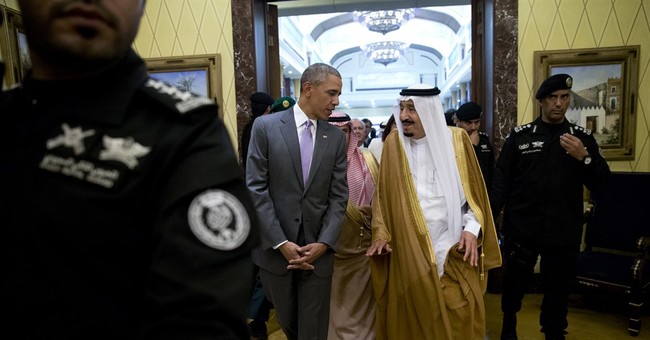 President Obama is in Saudi Arabia this week during a period of icy tension for our two nations. A piece of legislation currently making headlines would allow 9/11 families to sue Saudi Arabia and other foreign nations for financing terrorism. Saudi Arabia has threatened to sell off American assets should the U.S. allow the bill to proceed.

The bad blood was noticeable as soon as Obama arrived; The Saudi king did not even greet him at the airport.

Speaking to the press in Riyadh, Obama first fielded a question from the Associated Press to address the apparent hostility.

“Have you appeased tensions” after meeting with Saudi officials? the reporter asked. "Is there a greater cooperation against ISIL? Are our Gulf partners carrying their weight?"

“At any point in time, there are going to be differences in tactics,” Obama admitted. Part of the goal, however, is to not only share broad common interest, but to have knowledge of what each party is doing.

Cooperation within the Gulf Cooperation Council has been “consistent,” Obama insisted.

They have extensively worked with us, particularly in our effort to curb the financing of terror activities, he continued.

The president pointed to a cessation of hostilities in Yemen and the nuclear deal with Iran to try and offer some concrete evidence that the Gulf States have found some kind of unity in the fight against terror.

“We would not have gotten the Iran deal had not the GCC been cooperative of it,” he said.

There was “concern” in the initial negotiations over the nuclear deal, but “we didn’t look the other way” in regards to Iran’s destabilizing activities, the president said.

“Iran is doing what it was supposed to do.”

The president said we will “remain vigilant to ensure Iran fulfills its commitment.”

Yet, he admitted his administration continues to have “serious concerns about Iranian behavior.”

Obama also addressed his economic goals in Saudi Arabia, noting that the GCC is embarking on a new initiative to bring down oil prices.

Saudi officials say relations with U.S. will only improve after Pres. Obama leaves office. @margbrennan is in Riyadh pic.twitter.com/qh5iuQ1X4s