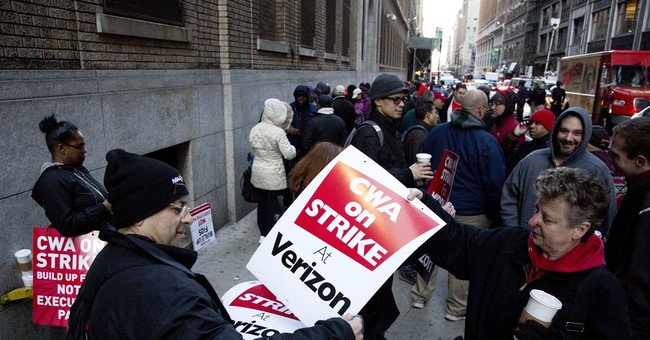 Attention Verizon customers: your TV shows may be in jeopardy. In what is being described as one of the biggest walkouts in recent history, 40,000 Verizon Communications Inc. employees went out on strike Wednesday morning.

The striking union employees are members of the Communications Workers of America and the International Brotherhood of Electrical Workers. Their dissatisfaction is the result of a contract that expired eight months ago. Little progress has made in negotiations for a new one, they argue. One Buffalo employee put into words how he and his fellow union workers feel pushed around.

"The main issues are job security and that they want to move workers miles and miles away," said Isaac Collazo, a Verizon employee who has worked replacing underground cables in New York City for nearly 19 years.

"We have a clause currently that they can't just lay anyone off willy nilly and they want to get rid of that," said Collazo, a single father of three children. "I feel if the company had the opportunity, they would just lay people off."

Verizon, however, issued a statement Wednesday insisting they have made "good faith efforts" to come to an agreement, to no avail. A strike, they insist, will help no one.

“It’s regrettable that union leaders have called a strike, a move that hurts all of our employees,” said Marc Reed, Verizon’s chief administrative officer. “Since last June, we’ve worked diligently to try and reach agreements that would be good for our employees, good for our customers and make the wireline business more successful now and in the future. Unfortunately, union leaders have their own agenda rooted in the past and are ignoring today’s digital realities. Calling a strike benefits no one, and brings us no closer to resolution.”

The unhappy employees have a champion in at least one presidential candidate. At his speech to students at the University at Buffalo on Monday, Vermont Sen. Bernie Sanders sided with the Verizon workers over what he described as a corrupt corporation. Verizon, he intoned, is guilty of forcing employees to pay more for health care, while cutting benefits and shipping jobs to the Philippines.

While the strike has the potential to disrupt service on the East Coast, Verizon did say it has trained thousands of non-union employees to ensure there were no blackouts.

Well, I'll guess we'll know for sure if "Game of Thrones" goes dark.