2016 RACE ROUNDUP: Will Campaign Charges Have Any Effect on Trump’s Numbers? 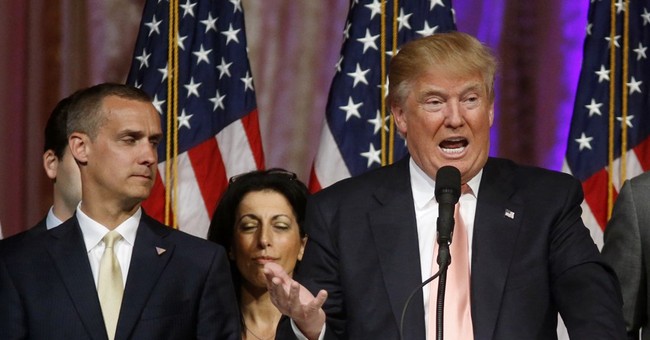 No primaries this week for the GOP, but we are not short on campaign headlines. The Trump camp heard some unfortunate news this morning regarding campaign manager Corey Lewandowski, who has been charged after new police footage shows him grabbing a reporter who apparently asked Trump a question he didn't like. After Trump and Cruz sparred over each other’s wives, a new ad from American Crossroads PAC is kindly reminding them to keep their focus on Hillary Clinton, who will be their ultimate competitor. Meanwhile, the Democratic contest has become a bit testier, with a newly confident Bernie Sanders stepping up his attacks against Hillary Clinton after his landslide caucus wins, even trying to pressure her into more debates. Her team, however, will not take the bait, insisting they will not agree to any more onstage confrontations until he changes his tone.

Donald Trump: Trump’s campaign manager Corey Lewandowski has been charged with misdemeanor battery for a physical altercation with former Breitbart reporter Michelle Fields. Trump denied the allegation and insisted Lewandowski was innocent, but the unfortunate situation will certainly not help the GOP frontrunner’s already rocky relationship with female voters. As for this incident having any effect on his national polling, history suggests Trump will remain at the top of the pack.

Pundits are predicting Trump may fall short of the 1,237 delegates needed to secure the nomination before a contested convention. To try and prove them wrong, Trump has hired Republican strategist Paul Manafort, who was hired to help Gerald Ford in the 1976 convention against Ronald Reagan, to lead his “delegate-corralling efforts.” Meanwhile, Trump is still full speed ahead in his lawsuit to deny Cruz Louisiana delegates he believes rightly belong to him.

Ted Cruz: Cruz gained the endorsement of Wisconsin Gov. Scott Walker on Tuesday, who heralded Cruz as a “principled constitutional conservative.” With the Wisconsin primary just a week away, Walker’s endorsement may be a critical one. The Texas senator also weighed in on the religious freedom bill in Georgia vetoed by Gov. Nathan Deal, noting how “disappointed” he was in Deal’s decision to “side with leftist activists.”

John Kasich: Team Kasich is reportedly hoping to team up with Team Cruz and deny Trump delegates. The Cruz campaign, however, doesn’t seem all that interested in a partnership. Kasich’s campaign is also pulling radio ads from Wisconsin and is apparently aiming to at least try to win some of the state’s delegates. Some media pundits and conservative congressmen argue he is just wasting his time. They are urging the Ohio governor to stop acting as a spoiler and exit the race.

Hillary Clinton is warning voters this week that a President Donald Trump cannot be trusted with a Supreme Court nomination. Meanwhile, her campaign is dismissing Sanders’ calls for more debates as a “public stunt.” Looking ahead to the April 19 primary in New York, where she served as a U.S. senator, her team is trying to ensure not just a win, but a landslide win – anything less would be an embarrassment.

Bernie Sanders’ landslide wins this weekend in Alaska, Hawaii and Washington gave the senator a boost of confidence. He slammed Clinton for raking in millions of dollars at fundraisers, including one with the Clooneys, which he called “obscene.” Clinton was unimpressed with Sanders’ rhetoric and her camp has indicated it has no plans to participate in future debates per his request, including one in New York, should he refuse to change his tone. Those comments prompted his supporters to start the hashtag #ToneDownForWhat on Twitter.