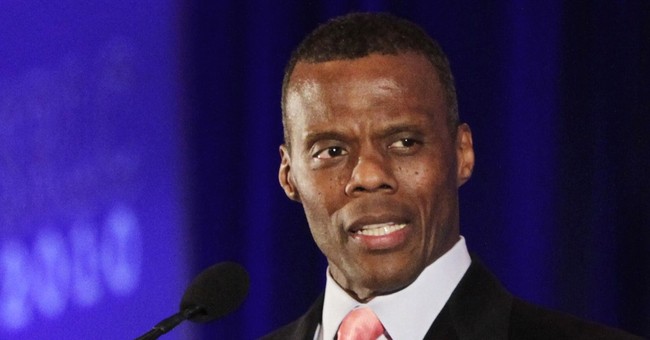 Congressman J.C. Watts has taken many hits - both on the football field and in the halls of Congress. Yet, he has somehow managed to live by faith and keep his priorities in place. He explains how in his new book Dig Deep: 7 Truths to Finding the Strength Within.

“Faith is kind of like a muscle,” Watts told Townhall. “The more you use that muscle, the stronger it gets.”

Watts has dealt with adversity in every arena of his life. In his book, the football player-turned-Oklahoma representative shares painful experiences of being racially profiled by police and by department store employees. He shared one especially egregious instance of racism during his college ball days, when one figure in Oklahoma apparently did not think Watts had a right to step on the football field.

“I’m sick of blacks and I’m sick of football players,” this figure said.

"I was the one he was talking about," Watts noted. "It stung initially, but from that I said I can’t control what that gentleman thinks or what he says. The only two things at the end of the day was my attitude and my determination to win.”

“I resisted getting in the gutter with him.”

Playing football may have left Watts with both physical and mental bruises, yet in politics, he explains, it has been even harder to predict the hits.

“In football I could see the blitz,” he explained. “In politics, just because someone wears the same color jersey as you doesn’t mean they want you to succeed."

“It is a contact sport and it can be very tricky,” he continued.

One of the most difficult times in Watts' political life, he related, was when he got involuntarily pulled into an FBI investigation.

"Seeing your name on the evening news was no fun," he admitted. "But I remember one day, I remember looking in camera and saying…I will wait for the results in peace."

He did - and nothing ever came of the supposed controversy.

Wrapping ourselves in the blanket of victim hood, he said, is so seductive. What we really need to focus on is: How can we learn from our adversity?

We need to look internally to fix our faults, as opposed to blaming external sources.

This thought process, Watts suggested, is a necessity for anyone seeking public office. Unfortunately, it doesn't appear to be very present in the current 2016 presidential race.

When Watts hears the candidates saying ‘that’s just the way I am,' it's a major red flag for the representative. What that usually means, Watts explained, is "humility is foreign to me - I don’t want accountability and nobody can correct me."

“The cheer of the crowd is intoxicating,” he continued. “I think it’s more intoxicating and more seductive in politics than any arena I’ve ever participated in.”

That's why humility, Watts emphasized, has to be a part of a candidate’s lexicon.

While the congressman did not name a current candidate who exudes this important trait, he did offer some examples of former leaders who did not have an arrogant bone in their body. George H. W. Bush and Billy Graham, he said, are two men who did not serve in public life for the roar of the crowd.

"If you didn’t know H.W. Bush was the 41st president, you never would have known it," Watts noted.

It's clear Watts tries to mimic these leaders' attitudes. Despite a busy life in politics, Watts makes sure to spend at least 20 to 30 minutes of quiet time with God every day, knowing where his true priorities lie.

As for those hits he's taken, he simply views each scar as another life lesson.

“I’ve learned more from my losses than my wins,” he said.

These are just a few of the many nuggets of wisdom Watts shares in Dig Deep. Order your copy today for more of his unique insight.