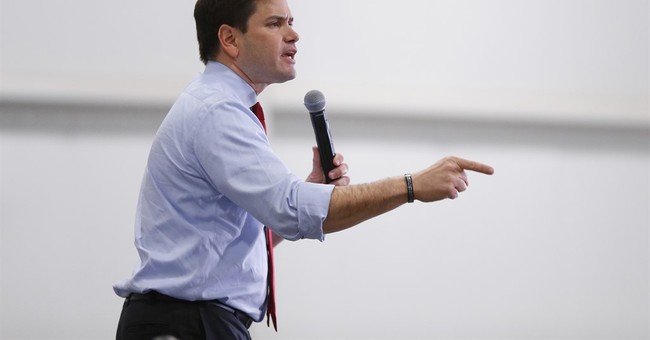 Another Super Tuesday is upon us. Michigan, Mississippi, Idaho and Hawaii are up for grabs in tonight’s contests. In other words, it’s going to be a long night.

In this week's juicy ad news, former presidential nominee Mitt Romney voiced robo-calls for the Rubio and Kasich campaigns, cranking up the volume on his anti-Trump vitriol.

With the most state victories under their belt, Trump and Cruz have the clearest paths to the nomination – and that’s bad news for the Republican establishment.

Donald Trump: Trump has been fielding questions about a recent campaign rally where he asked supporters to raise their right hand and promise to vote for him. That, critics argue, too closely resembled the Nazi salute. While Trump told the Today Show that comparison is “ridiculous,” he did promise to “look into” whether he will keep doing it. In other news, he is still dismissing criticism from Romney, calling him a “failed candidate” who couldn’t even get elected dogcatcher.

Ted Cruz: RedState predicts that for Cruz to maintain Saturday’s momentum, he needs to at least win Idaho and Mississippi Tuesday night.

Marco Rubio: Rubio surrogates have been pushing back against a CNN report that claimed his staff wanted him to pull out of the 2016 race before the Florida primary. That story, Rubio’s communications director Alex Conant said, was “fiction.” On CNN Monday night, Conant said the network should be ashamed for running the report without even reaching out to their campaign. Rubio’s camp is also blaming Cruz for sharing the false report. Cruz is “up to his dirty tricks again,” Rubio spokesman Joe Pounder stated. Rubio appears to have a lead in early voting in Florida. Yet, if tonight is anything like Saturday, it may severely threaten his campaign.

John Kasich: Regardless of what happens in tonight’s primaries, Gov. Kasich insists he is going to stay in the race at least until his home state of Ohio, where he is confident he’ll pick up a win.

Hillary Clinton and Bernie Sanders visited Fox News Monday night to participate in a town hall with Bret Baier. It was Clinton’s first time on the network in two years and Baier took advantage of the opportunity, asking her a host of tough questions. For instance, Clinton was tasked to defend her leaving Libya a disaster following her tenure as secretary of state and her radical abortion agenda. In a new national poll, Clinton is down to a 9-point lead over Sanders. Following the typical trend, young people are choosing Sanders over the former, scandal-ridden secretary of state. In the survey, voters younger than 50 voted for Sanders 60 percent to Clinton’s 38.