Four Days to South Carolina: Who's Attacking Who 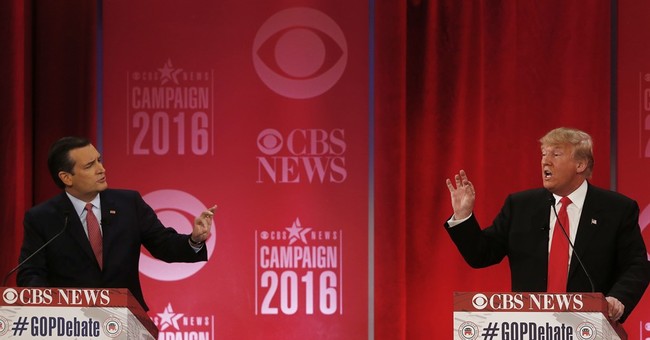 With four days to go until the South Carolina Republican primary and six remaining contenders, we still have plenty of fireworks going off in the 2016 race. Saturday’s fiery debate in Greenville was arguably the most entertaining of the election and was a perfect lead up to this weekend’s vote.

Here’s just a glimpse into the status of each candidate’s campaign. Who’s topping the polls? Who’s targeting who? Who’s barking like a dog? (Really.)

Donald Trump: Though he is receiving a lot of backlash from conservative leaders and commentators for pinning the 9/11 terror attack on Pres. George W. Bush at Saturday’s debate, Trump is still way ahead in South Carolina. As many of his supporters indicated, debate night appeared to have little impact on their vote.

Ted Cruz: The Cruz campaign launched a new ad this week called “Supreme Trust,” targeting Trump. In the spot, the narrator defines Trump by his pro-choice past and argues the businessman can’t be trusted to appoint a conservative justice to replace the late Antonin Scalia. Cruz also vowed to filibuster any of President Obama’s judicial nominees. Cruz has also not forgotten his rivalry with Rubio and continues to sett his sights on Marco Rubio’s immigration record. His campaign sent out a press release Monday insisting Rubio “can’t handle the truth” or escape the fact that he supported amnesty for millions of illegal immigrants.

Marco Rubio: After calling Ted Cruz a liar at Saturday’s debate, Rubio is not backing down over Cruz’s own history on immigration. Meanwhile, Rubio surrogate Rep. Trey Gowdy is stumping hard for his friend. In a new ad entitled “Fear,” Gowdy insists the Florida senator is the best candidate to “bring back American strength.” Gowdy has also demanded that Cruz apologize for questioning Rubio’s pro-life record.

Jeb Bush: Former President George W. Bush joined his brother Jeb on the campaign trail Monday in South Carolina for the first time this campaign cycle. “There’s no doubt in my mind,” Bush said, that Jeb has the experience and the character to be a great president.” On the same stage, Jeb, who defended his brother at Saturday’s debate, continued to stick up for his big brother, calling Trump the “Michael Moore” of the Republican Party.

John Kasich: Kasich pulled off a strong second place finish in New Hampshire last week. Perhaps not expecting the same result in South Carolina, the Ohio governor briefly left the Palmetto State to campaign in Michigan, where he anticipates success. He has chided his opponents for their negative attacks, while pledging to keep his campaign message positive.

Ben Carson: While some pundits have predicated a Carson exit after Saturday’s South Carolina debate, the retired neurosurgeon has indicated he’s in the 2016 race for the long haul. In a recent op-ed for Fox News, he insisted he is ready to take on the threat of terror, declaring that as president he would not hesitate to declare war on ISIS. He hosted a large gathering of Christian supporters at a rally in Spartanburg Tuesday.

Thanks to all who came to our 714 Revival in Spartanburg! I believe that God still has great plans for our nation. pic.twitter.com/LFF6pPvOXM

Standings: The newest South Carolina PPP survey has Trump in front with 35 percent, Cruz and Rubio with 18 percent, Kasich with 10 percent and Bush and Carson with 7 percent.

Hillary Clinton is barking at Republicans, but is way ahead in South Carolina with 55 percent to Bernie Sanders’ 34 percent. He is, however, catching up to Clinton in Nevada.